The Japan Meteorological Agency apologized for overestimating the risk for tsunami. However, I guess few people make a complaint about the alarm so that many people still remember the tsunami of 50 years ago. Although no one suffered damage, the tsunamis caused extensive damage to oyster farmers.

Tsubaki(椿:The Japanese Camellia or Camellia japonica) has long been loved from ancient times in Japan. It was highly prized in tea ceremony, so that variety of camellias were developed. sazanka(山茶花) looks like camellia in appearance. camellia blossoms are relatively larger than sazanka and the whole of a blossom falls off a tree. Sazanka blossoms flowered earlier than most kinds of tsubaki. 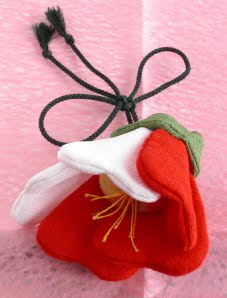 The knot is called agemaki-musubi(総角結び:True Lovers Knot). Agemaki(総角) is one of the hair styles for children in ancient times. It's also a charm against evil.
Agemaki is also the 47th chapter's title of "The Tale of Genji" written by Murasaki Shikibu. Its title comes from the following waka poem that the hero Kaoru(薫) sent to a woman named Oikimi(大君).

However, he was not able to tie the knot with her. She turned down his proposal and died of anxiety. 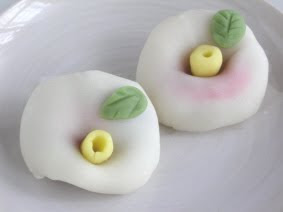 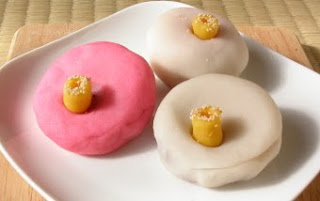 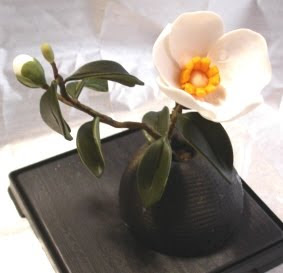 Kougei-gashi,Tsubaki(工芸菓子・椿) :
This confection is for ornamental use. All parts including blossoms, branches, leaves and a vase are made of dough mixed with sugar and powdered rice. Wires are also used for branches.
Although it's for beginners, I struggled with making this.
投稿者 ichinen 時刻: 10:59 PM