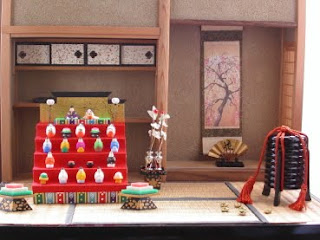 On March 3rd, Hina-matsuri(the Doll Festival) for girls is celebrated in Japan.
In the Heian Period over 1,000 years ago, people used to float dolls down the river to wash away their impurities after transferring their impurities to the dolls. It is said that the origin of Hinamatsuri is this custom introduced from China.
So girls have their own Hina dolls. Parents (or grandparents) buy Hina dolls for their daughter when she is born. 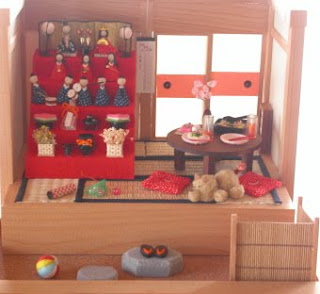 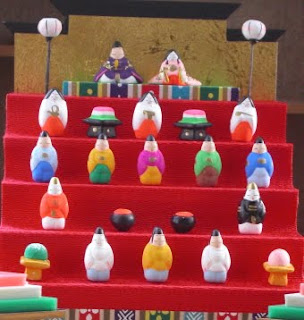 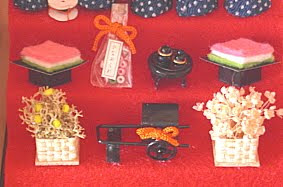 Hina dolls meant a couple of dolls until the late Edo period.People came to display attendants, miniature furniture and so forth, with them on a tiered stand.

2.On the second shelf are sannin-kanjo(三人官女:three female attendants).
They pour out shirozake(white sake) for the coule.

3.On the third shelf are gonin-bayashi(五人囃子:five musicians) consisting of three percussionists, a flute player and a singer.

5.On the fifth shelf are attendants holding shoes, a shrouded parasol and hat(in Kyoto, holding cleaning things).
Ukon-no-tachibana (右近の橘: tachibana tree on the right) on the far right and Sakon-no-sakura (左近の桜:a cherry tree on the left) on the far left are placed. They were planted in front of the Shishinden (紫宸殿, Hall for State Ceremonies) of The Kyoto Imperial Palace.
Some family crests or patterns are designed in the motif of tachibana(scientific name：Citrus tachibana).
There are hishimochi(菱餅:diamond-shaped ricecakes) on the diamond-shaped stands, coverd bowls on the ozen(お膳:a small dining table), goshoguruma (御所車:an ox-drawn coach). 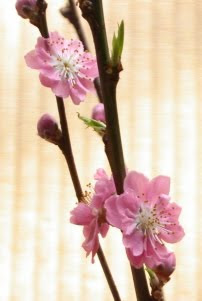 the Doll Festival is also called "Momo-no-sekku",which means the festival in peach blossom season. However, peach trees have yet to bloom on March 3rd in the solar calendar.

Shirozake(白酒:white sake made from fermented rice, a kind of liqueur) that three female attendants pour out was originated by Toshimaya(founded in 1596) for the Doll Festival. Even now, shirozake is available at Toshimaya.

as far as I know, hina-arare(雛あられ)is puffed and sugarcoated rice. In the Kansai region, it is bite-sized rice crackers flavored with sugar or soy sauce.

Flowers for the Doll Festival are sold in sets with some branches of blooming peach tree and nanohana(菜の花:rapeseed). They are higher than usual. They could cost about ￥700. Rapeseed is in season. 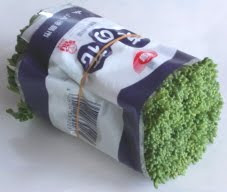 A kind of rapeseed is edible. It has slightly bitter taste similar to other some spring vegetables. 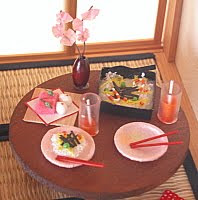 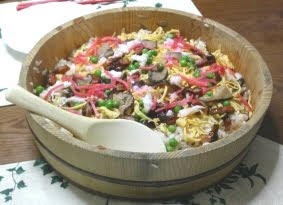 This chirashizushi is made by
1. slicing and seasoning shiitake mushroom, carrot, bamboo shoot with soup, sugar and soy sauce on heating,
2. frying an egg like crepe and slicing the fried thin layer of egg like string,
3. mixing rice with sugar, vinegar and salt,
4. mixing (1) with (3),
5. topping (2), conger eel, green peas and pickled ginger.
Various ingredients such as boiled shrimp, boiled and sliced field peas, sweet pickled lotus root are topped on that rice.

A salt-based soup containing unshelled clams is also served with it. 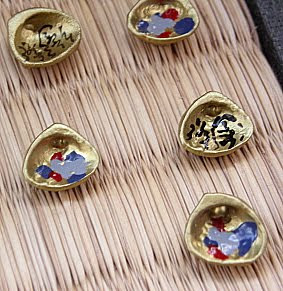 Kai-awase(貝合わせ) is a play like concentration(Pelmanism).
The inside of a clam shell is painted and gilded.
The same picture is painted on paired shells. 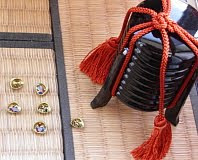 Kai-oke(貝桶)is a container to store a set of clam shells for kai-awase.

kami-fusen(紙風船:paper balloon) puffs up by blowing into the hole. 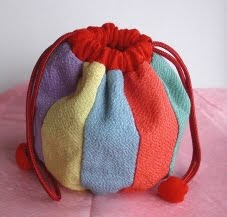