Two periods of seven days with the middle day falling on the spring or autumn equinox are called Higan(彼岸), which means "the other shore" or Buddhahood. On the other side of a river, there is Buddhist paradise and we live in the world of suffering on this side of the river(此岸).
Buddhist Higan service came to be held on the days of the equinox when the sun rises from the exact east and sets in the exact west, because Buddhist paradise has been considered to be in the west.

We visit our family graves, clean them, offer flowers and burn incense and also make offerings of flowers, confections such as ohagi and incense at Buddhist altars.
During Higan, The cemetery containing my family grave is very crowded. 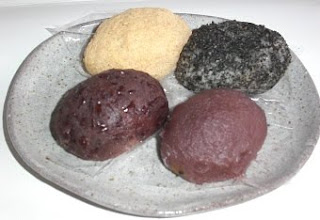 o-hagi(御萩):
it's same as bota-mochi(牡丹餅). sticky rice balls coated with sweet bean paste, soybean flour and sesame.
We eat o-hagi at Higan in spring and autumn.
It's called botamochi in the season for botan(牡丹:tree peony blossoms) and called ohagi in the season for hagi(萩:Lespedeza or Japanese bush clover).
投稿者 ichinen 時刻: 10:29 PM