May the new year brings the happiness, luck, and peace into your home.

2018 is the Year of the Dog according to the Chinese zodiac.
Each of the 12 Chinese zodiac signs is related to a characteristic animal.


Hatsuyume referred to the dreams that occurred on the night of Setsubun (now January 2nd) by the early Edo period.
It is said to be particularly good luck to dream of Mt. Fuji, a hawk or an eggplant in the first night of the year.


During the New Year holidays, boys used to enjoy kite-flying or top-spinning.


A lion dance as a thing doing epidemic extermination / exorcism


rice cake pounding
Mochi are to a Japanese new year what mince pies are to Christmas in the UK.
Originally New Year's rice cakes called Kagami-mochi are offerings to the deities.


Sacred arrows(破魔矢, hamaya) to exorcise evil spirits are sold in many Shinto shrines.

Inuhariko (papier-mache dogs) has been regarded as a charm against evil for children. Parents (and grandparents) bring the child to a Shinto shrine, to express appreciation for the deities and pray for his or her health and happiness one month after birth. Relatives send Inuhariko to the child.

Why do these Inuhariko wear a bamboo basket?

1) A openweave basket is a symbol for preventing stuffy nose( and a cold.)
2) The word “竹” meaning bamboo and the word “犬”meaning a dog. A combined word with “竹”and “犬”is similar to the word “笑” meaning a laugh. 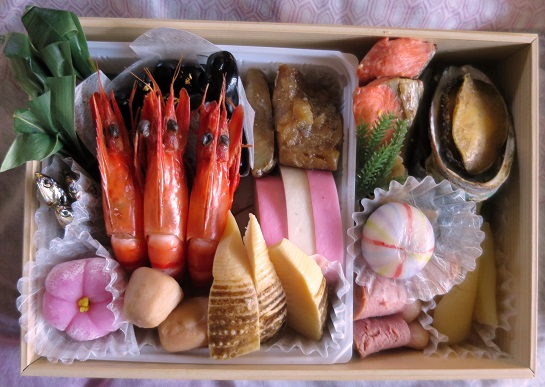 This Osechi is easy to chew and to swallow for elderly people. 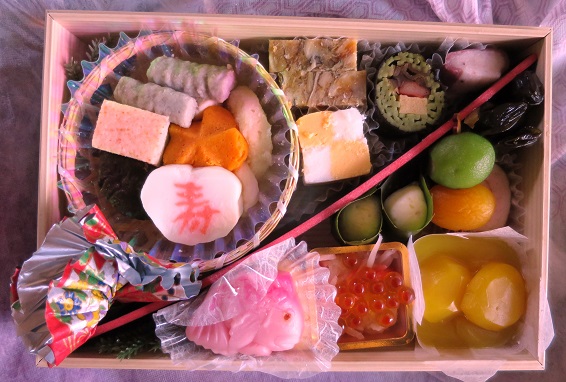