Although ume（梅, Prunus mume) is often translated into English as plum, it is more closely related to the apricot. Plum(Prunus salicina) is referred to sumomo(酢桃 or 李) in Japan.

Many ume trees were planted in order to secure ume fruits as army provisions over 600 years ago. Odawara is a town that was a resting spot along the Tokaido road in the Edo period.

Umeboshi(pickled ume fruits) quench thirst, relieve fatigue, and prevent decay. They were popular among travelers, and travelers placed them in box lunches.

Umeboshi is made by pickling ripe ume fruits in salt with red shiso leaves, drying them in the sun. My home-made umeboshi is ready. After that, some people soak them again in the vinegar from the fruits.


a box lunch with a umeboshi in the center of rice


Umeshu is a liqueur made by soaking unripe ume fruits in crystal sugar and Shochu(Japanese distilled liquor).


Bonbai means ume tree bonsai. This event was derived from about 40 ume bonsai that a bonsai lover donated to Nagahama City in 1951.  He collected old ume trees growing in the mountains. After potting them, he trained them into bonsai for years.  Potting old trees is said to be very difficult.  This event started in 1952.


About 90 bonsai trees are open to the public.
Now some bonsai experts take care of these bonsai trees. They also collect old ume trees, potting them and trained them into bonsai for 10 to 20 years.  After training for years, ume trees make their debut as bonsai at this event every year.

Keiun-kan Guest House(慶雲館) was built as a temporary palace for Meiji Emperor on a tour in 1887. Its circuit style garden created by Jihei Ogawa is designated as a national scenic beauty. Usually, the house is open to the public from March 24th to November 30th.

Furo(不老, eternal youth), far right, is about 400-year-old ume tree with double red flowers. It is 2.5 meters high and 1.8 meters around.


Shirosudare(白簾) is called from its resemblance to a curtain made of strung white beads.


Hanasudare(花簾) is called  from its resemblance to a curtain made of strung beads.


Umegae-mochi(梅が枝餅) is a rice cake filled with sweet bean paste and a ume design is stamped on top.  Its name is derived from an episode of Sugawara Michizane.
Umegae-mochi is sold in Dazaifu City, Fukuoka Prefecture.
Legend has it that the ume blossoms in his garden followed him to Dazaifu  in the air.

Ume and a white-eye 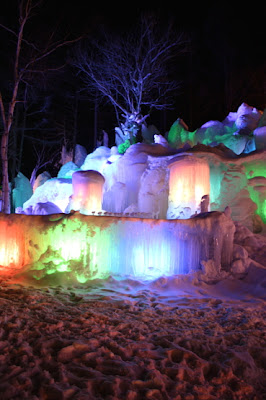 There are open-air baths and an ice bar on the lake. Kotan means "god of the wind" in the Ainu language. Ainu are aborigines who lived mainly in Hokkaido and Sakhalin.

From early November to mid April, many swans pass the winter in the Tokachi River near the hot spring.

So far about 10,000 visitors including many Asian tourists from snowless countries took part in the tour. They walk through drifting snow and ride in a horse-drawn sleigh.

The festival dates back 400 years. German architect Bruno Taut(1880-1938) visited Yokote in 1936 and described his impressive experience at the festival in his book "A Rediscovery of Japan". 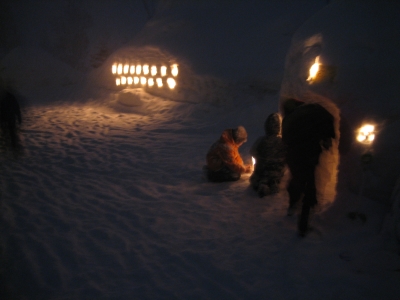 Participators can enjoy many outdoor and indoor activities such as making and eating soba noodles, making snow lanterns, snow rafting, snow trekking, sleighing, rice-cake making, dyeing with vegetables, handheld fireworks, an exchange party with local people, and a hot spring.
Those wishing to visit need to make reservations. This event was closed to new entries. 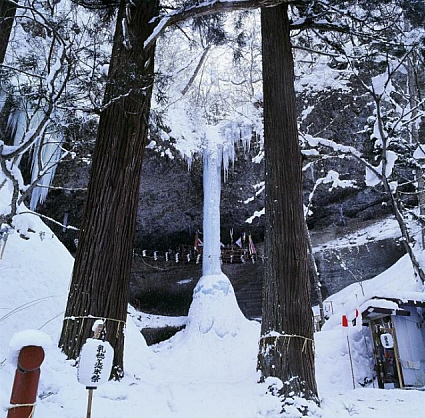 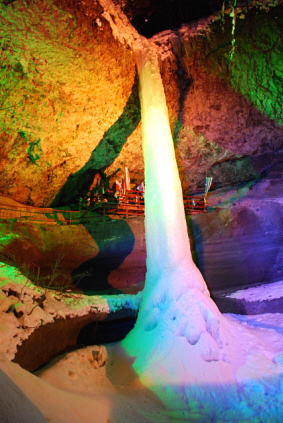 Fudo-son (Fudo Myoo (Acala, one of the Five Wisdom Kings)) is enshrined in a cave behind the falls. The outcome of the year's harvest is divined by watching the diameter and shape of the frozen falls. Visitors can also enjoy a big kamakura, a snow slide.

People in Hachinohe feel that long and hard winter is nearing an end when the festival ends. 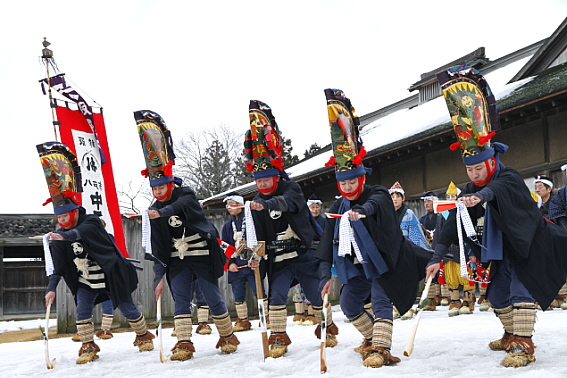 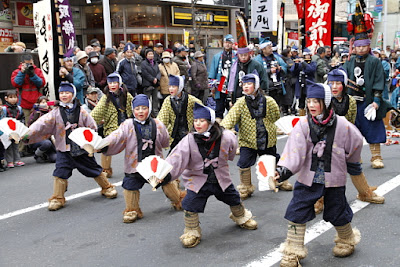 More than 30 enburi groups participate in this festival.


﻿﻿
After that, enburi performers dance in front of shops and homes in the city until 8 or 9 p.m.. It's called Kadozuke. The performers accept gratuities. 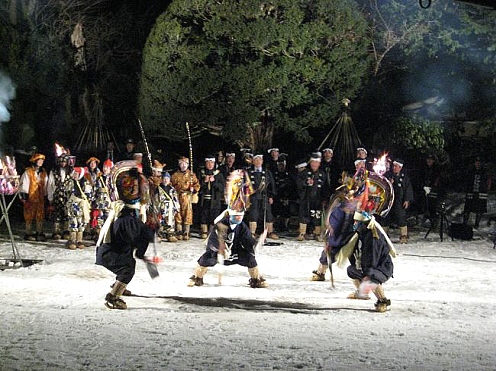 Oniwa Enburi is performed at Kojo-kaku(更上閣). In ancient times, wealthy people had enburi groups perform at their homes. Oniwa Enburi was revived so that visitors can sense a taste of the past.
Kojo-kaku was build as a Japanese-style wooden residence in 1897 and was designated 'Country Registration Tangible Cultural Properties' in 2003.

Dosai Enburi is quick in movement. Its performers wear eboshi with long fringes of five different colors. They hold sticks with metal ornaments on its tip in their hands. 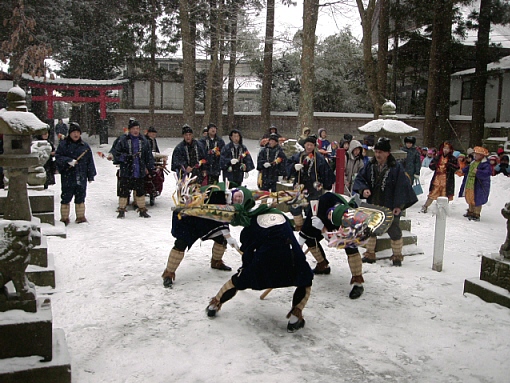 It is said that Momoishi Dosai Enburi came from Kiriyanai(切谷内) in Gonohe-machi(五戸町) to Momoishi about 180 years ago. Enburi performers dedicate their dance to Wakamiya Hachimangu Shrine(若宮八幡宮). After that they parade through the streets, perform their dances in front of shops and homes and accept gratuities.

This is a ice festival. Snow candled are decorated everywhere in the city. 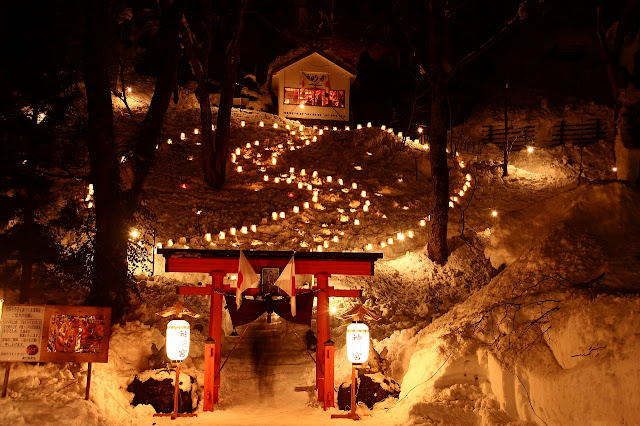 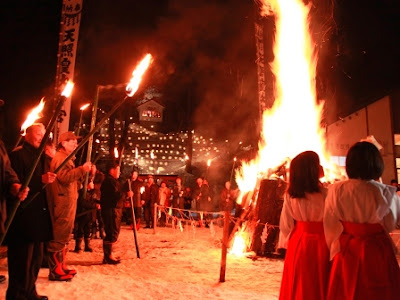 Candles are lighted at Iwaya-do(岩谷堂) in Sawada Shinmeigu Shrine(沢田神明宮).
On the following day, the harvest outcome and weather of the year is divined by watching wax dripped from from the candles.

Iwaya-do is a small shrine made in a depression of a rock.
Local people and visitos can also light candles at the shrine. 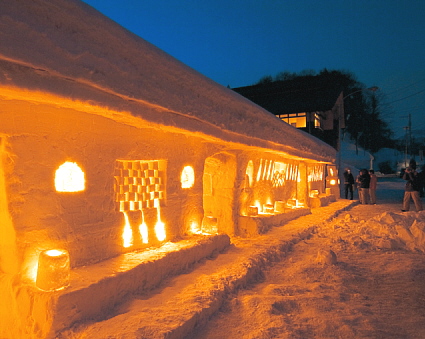 Gassan-shizu hot spring area is located on the route to Mount Gassan that has been the subject of mountain worship from ancient times. The old town scenery of the area is reproduced by use of heavy snow. The area has snow six meters deep in winter. Unlike other snow festivals, buildings are made by carving out of snow on the ground.  Visitos can enjoy four snow inns, an ice bar, a kamakura, and an snow slide. They can enter the inns in which some snow statues, the tables and chairs are carved.
投稿者 ichinen 時刻: 1:33 AM 2 comments: