Mibu Kyogen(壬生狂言) is being held at the Mibu-dera Temple in Kyoto from April 21 to 29.
It's a silent play created to propagate Buddhism to ordinary people. It became a type of entertainment in the Edo Period. Buddhist priest Engaku Shonin is said to have begun the Mibu Kyogen in 1300. This annual performance has been held uninterruptedly since 1300. It has been designated a significant intangible folk cultural asset of Japan. Kyoto people call it "Mibu-san no Kan-den-den".

The devotional exercises are performed morning, afternoon, and night from April 21 to 29. Mibu Kyogen is performed as the afternoon exercises during the period. The performance is dedicated to Ksitigarbha(延命地蔵菩薩), the principal image of the temple.

Performers in masks perform with the sound of bells, drums, and flutes. The performance consists of 30 programs in total. Performers throw rice crackers into the audience in Atago mairi(Pilgrimage to Mount Atago), throw paper yarn into the audience in "Tsuchigumo(The Demon Spider)", walk the tightrope in "Nue(Nightmare Bird)", smash unglazed plates in "Horaku wari(Smashing Plates)".

First Horaku wari(Smashing Plates), and then four of other programs are performed every day from April 21 to 29.

Mibu Kyogen is also performed for two days during the Setsubun Festival (February), and for three days in October.  At the Setsubun Festival, only one program "Setsubun" is performed.
The October performance used to be done irregularly. Although being discontinued in 1871, it was resumed in 1974.

Mibu-dera is also known for its connection to the Shinsengumi(新撰組) which is an armed group who guarded Kyoto during the end of Tokugawa Shogunate. The group included lordless samurai warriors and commoners. Now Shinsengumi is better known than Mibu Kyogen.

The Yagi family's house was used as a military post of Shinsengumi.

Shinsen-en Kyogen(神泉苑狂言) is performed at Shinsen-en(神泉苑) in Kyoto from May 1 to 4. Admission is free.
The Mibu-dera's head priest at the time forced through reforms of the association in 1900.

Some of its members rebelled against the reforms and formed a different organization.  They started Shinsen-en Kyogen in 1905. Now the head of the Yagi family is the facilitator for the two organizations.

Shinsen-en Festival is held on May 5. The festival includes carrying of a portable shrine, children's parade, performances of Japanese drums and dance.

In Kyoto, there is a custom to visit Mibu-dera during the Setsubun Festival (February) and dedicate unglazed plates to the temple after writing family members' ages and sexes on the plates.
In this program, these dedicated plates are broken. Breaking the plates protects dedicators against evils.


A young monk, a master and his servant engage in witty dialogue. This is a lesson to drinkers. The monk's mask was dedicated by Ito Jakuchu(伊藤 若冲, 1716–1800) who was a famous painter.
﻿﻿

A woman(Kiyohime) falls in love with a handsome monk (Anchin) at first sight, but he is on his way to a temple. It is very troublesome for him. He lies to her and flees from her. Knowing that she is deceived, she flies into a fury and turns into a huge serpent. He flees into the Dojo-ji Temple and hides underneath the temple bell. The serpent winds itself around the bell and burns him to death.

This program is a sequel of this legend. The temple places a new temple bell. Kiyohime's vengeful ghost appears and hides underneath the bell. Then the bell falls with a loud crash. The main priest prayed absorbedly, and the bell is lifted. He exorcises the ghost by prayer.
﻿


Ashikaga Flower Park first comes to mind when I think of a wisteria viewing spot. Now is the best time to view purple and pale pink wisterias. About 145-year-old big wisteria is expected to peak soon.
I have posted another photos of the park's wisterias here before.

It is said that an imperial prince himself planted the wisteria in 1395. The wisteria has been designated as a national natural treasure.

According to legend, an imperial prince prayed to cure his battle injury at the shrine in 1359, and he presented a wisteria to thank the deity for his full recovery.  The tree is estimated to be 650 years old.

The temple is famous for its azaleas.

The tree is designated as a Special National Treasure. The tree is estimated to be over 1,000 years old. It's expected to peak from April 25 to May 3.
According to legend, the Buddhist priest Kobo Daishi(774-835) himself planted the wisteria on the ground of a temple. Its owners changed several times after the temple was abolished in 1874. The garden maintains the tree now. The tree is open to the public for a fee only during flowering period.

The shrine has been well known as a wisteria viewing spot since the Edo Period.  A wisteria festival is being held from April 20 to May 6.
﻿

The Owari Tsuhima Wisteria Festival(尾張津島藤まつり) will be held from April 25 to May 6. Tsushima was famous for its wisterias. The park has 114 trees of 12 different kinds.
﻿

When passing under the wisteria, people feel as if they were purified with onusa.
Onusa(nusa) is streamers (made of linen, paper, etc.) attached to a long pole and is used for purification at religious services of Shinto. It is waved left and right during purification rituals. Ancient people transferred their stains onto it by rubbing themselves with it and threw it in rivers.

It is said that the wisteria was planted in 960.
﻿ 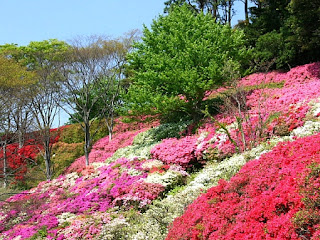