An annual ritual commonly known as Omizutori is held at Nigatsudo hall of Nara's Todaiji temple from March 1st through the 14th. Its preparation started on February 20th.

The ritual continues a tradition that started in 752. So this year marks the 1,259th anniversary. Monks started the ritual to repent of their sins. Now they pray for world peace and prosperity during it.

On the evening of the 1st, they dedicate rice cakes, 400 camellias and 50 nanten(nandina) made of Japanese paper to the 11-faced form of Kannon Bodhisattva housed at the hall.

From about 6:30 p.m. to 8:00 p.m., they run along the hall's balcony, carrying huge burning torches every day from March 1st to 14th. On March 12th, monks use larger torches. People believe exposure to the sparks brings good fortune.

Monks draw water from the special sacred well underneath the hall around 2 a.m. on the 13th. The water is offered to the Kannon.

●Rouben-sugi-no-Yurai(良弁杉由来:the origin of the cedar named Rouben)Originally it was one of a omnibus bunraku play and premiered in 1887.
Legend has it that Rouben (良弁、朗弁) (689–773), who was clerical founder of the Tōdai-ji temple in Nara of Japan, was snatched by an eagle and dropped off in front of Nigatsu-do hall when he was a baby and reunited with his mother after becoming a high priest 30 years later.
This story is based on its legend. His mother was so obsessed with her son that she lost her mind. After returning to her senses, she goes to see him on hearing a rumor. when they meet again, Rouben realize that he has been afflicting her despite he has been praised as a person of virtue. 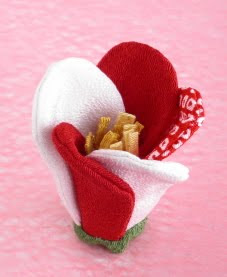 crepe camellia modeled after above-mentioned paper camellia. There is also a confection resembling it.