In the tea ceremony, decorating rapeseed or serving confections in its motif are not allowed until March 28th, the anniversary of Sen no Rikyu's death.
The tea master Sen no Rikyu(千利休) committed ritual suicide under the order from Toyotomi Hideyoshi, a man of power, on the 28th day of the 2nd month (April 21st according to the Gregorian calendar) in 1591.

It's still not clear why Rikyu was ordered to kill himself despite he was at the top of cultural figures. Rikyu established the tea ceremony and a mutually dependent relationship was created between Rikyu as an authority on art and Hideyoshi as the power that be. Some people say the growing influence of Rikyu on feudal lords upset Hideyoshi. 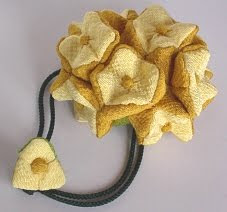