Spring is in full bloom

Cherry blossoms reached full bloom on the 22th in central Tokyo and Yokohama, and started blooming on the 21th in Osaka. Meanwhile, a strong snow storm hit Hokkaido on the 21th.


﻿
﻿
Two periods of seven days with the middle day falling on the spring or autumn equinox are called Higan(彼岸), which means "the other shore" or Buddhahood. I visited my family grave with my family on the 22nd. 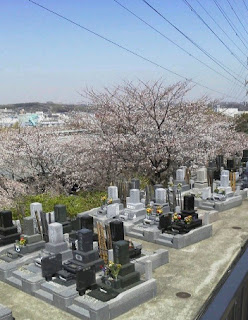 Kinkasan (金華山, Kinkasan or Kinkazan) is a small sacred island off the Oshika Peninsula in Miyagi Prefecture. The island is covered with primeval forest. It's only the workers of Koganeyama Jinja Shrine(黄金山神社) who live in the island.Wild deers and monkeys live there. The deers have been regarded as the messengers of a deity, so they are wandering around the shrine.

A man posted his experience of the Great East Japan Earthquake of 11 March 2011 on the island. He and his friends headed for higher ground amid aftershocks shortly after the quake, facing the peril of falling rocks. There was a memorial monument of the 1933 Sanriku earthquake on the ground. They took shelter temporarily in the shrine. The shrine provided a room and meals to visitors. On the 12th, a sightseeing boat came to pick up them, and they crossed the sea to the peninsula.

Hirosakidake Ajigasawa Line of Aomori Prefectural Route 3, Hirosaki City, Aomori Prefecture
Predicted flowering period: early to mid May
About 6,500 cherrt trees are planted along a stretch of about 20 km.


Hirosaki Cherry Blossom Festival will be held at the Hirosaki Park from April 23rd to May 6th. Hirosaki Park includes Hirosaki Castle constructed in 1611 and its grounds.
Predicted flowering period: late April to early May 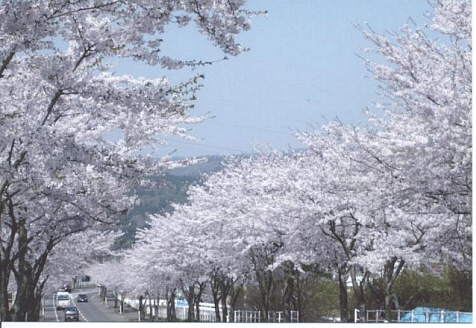 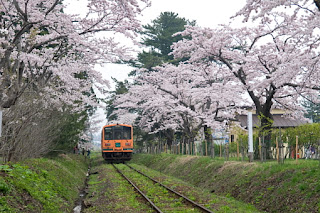 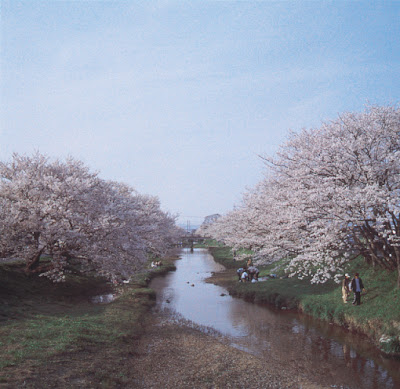 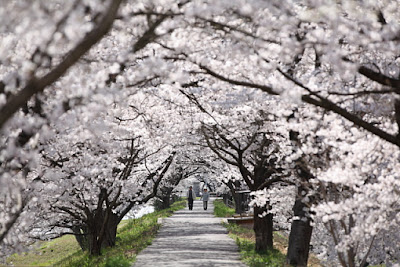 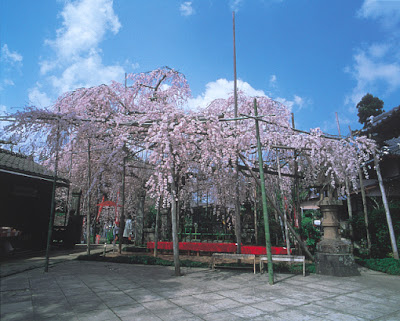 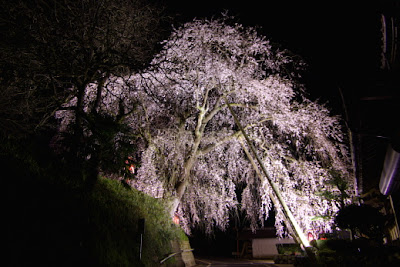 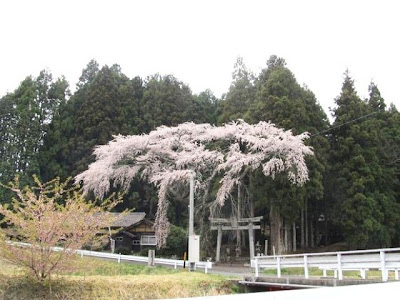 Tokyo reached 25 degrees Celsius on March 10th.  A blizzard hit Hokkaido and the northeastern Tohoku region on the same day.  In Hokkaido, nine people were killed in the blizzard last weekend. High temperatures was 11 degrees on the 11th in Tokyo.


Yellow dust(黄砂, kousa) was observed in western Japan on the 9th. The dust is carried to Japan by subtropical westerlies from deserts on the Chinese continent.  In recent years, a large amount of yellow sand often reaches Japan from March to May.  As a result of desertification, sand storms are growing in scale in North East Asia.

Industrial pollutants are also brought to Japan from the Chinese continent. So-called PM2.5 air pollution is a big problem even in Japan. The haze enveloped Tokyo on the 10th, but it was not due to yellow dust. Powerful winds restricted train services on the 13th.
Unfortunately, hay fever season is also at its peak.

Cherry blossoms will be in full bloom from the end of this month to the beginning of April in many areas.
The following sites(Japanese version only) offer cherry-blossom viewing spots and blooming status.
http://hanami.walkerplus.com/
http://sakura.yahoo.co.jp/
http://www.mapple.net/sp_sakura/
http://www.rurubu.com/season/spring/sakura/

Two years have passed since the Great East Japan Earthquake on March 11th. The government-sponsored memorial ceremony for its victims was held on March 11th and its participants observed a silent prayer at 2:46 p.m., the exact time the earthquake occurred.


As of March 11, 15,882 people died, 2,668 are missing, and 2,303 died from overwork or illness after the quake. As of February 7, 315,196 people are living in temporary housing, rented accommodation, relative's homes, hospitals, and an evacuation center. Surprisingly, 139 people from Fukushima are still living in an evacuation center. Many families of victims are still waiting for their missing family members. The search for missing persons is still continuing. It's getting difficult to identify badly damaged bodies, so 131 people remain unidentified to date.

It has been only two years since that day, but the interest of people living in other areas is gradually waning with the passage of time. Debris was cleared away in most tsunami-hit areas, but most of the areas are now vacant.

There're a lot of problems, and recovery efforts have not progressed. The shortage of materials and human resources constitutes barriers to getting public-works projects under way. So many people gave up to rebuild their houses in their town and moved to another town. The population of the areas has decreased. The recovery from the quake is far from over. Officials in local governments and supporting members from other areas have more work than they can manage.
Many of the afflicted people feel left out. They have struggled to rebuild their lives soon after the earthquake. They rebuilt or reopened their shops and factories, and found jobs. But now many of them don't know where the finish line is, and they feel exhausted and overwhelmed.

The nuclear accident in Fukushima is not over yet. Decommissioning of the plant is expected to take at least 40 years to complete. The decontamination operations have made little progress. It is extremely difficult to make complete decontamination of all the designated areas. Many people who lived in the 'Exclusion Zone' are giving up hope of returning their homes. On the other hand, the Japanese government lifted ban on entry to some parts of the zone.


I want to introduce several episodes from newspaper articles and TV programs about the tsunami.

When the remains of the Rikuzentakata's Civil Hall in Iwate Prefecture was demolished last month, a muddy cell-phone was found. A newsperson tried to switch on the phone. Contrary to his expectations, it was switched on. He dialled the home phone number in the phone. Her mother answered the phone. She was killed by the tsunami. She e-mailed her husband from a park two minutes before the tsunami hit the park. He faced her corpse on March 20 in 2011.

When a man faced his father's corpse, he found that a watch worn on his father's wrist was still working. It was the watch he presented his father. He felt strange. His father was dead, but his watch was working.

A painter asked several children in a tsunami-hit area to tell what they like. He intended to paint the subject of their choice. Surprisingly, they requested the sea and fishes.

A high school girl reached a gym designated as an evacuation shelter after the quake. The tsunami rushed toward evacuees. The water was almost up to the ceiling of the gym. Many people in the gym were drowned. The gym was blocked by a heap of rubble and corpses. Few survivors including her huddled together to wait to be rescued, on the heap of corpses. All the exits are blocked by the rubble. There was no place to step in the gym, except for the heap of corpses. Outside, it was snowing. The gym was open on all sides to the weather. They were drenched to the skin. They were wearing a dazed expression. She was too stunned for tears.

There are many harrowing stories about the tsunami.
投稿者 ichinen 時刻: 11:38 PM No comments:

Haru-ichiban(春一番) blew in Yokohama on March 1st. Haru-ichiban is the first strong south winds of the year between Rissyun(立春:the first day of spring,Feb 4th this year) and Syunbun(春分:spring equinox,March 21th this year).
At the same time, a lot of Japanese cedar pollen has started to be dispersed into the air.

The 1262th Shuni-e(修二会) is being held at Nigatsu-do hall of Todaiji temple in Nara Prefecture from March 1st through the 14th. This annual religious ritual known as Omizutori(お水取り) started in 752 and the temple's monks pray for world peace and prosperity.


March 3rd is the day of the Doll Festival (hina-matsuri) to pray for the healthy growth of girls.

Although most hina dolls are expensive, most girls have their own hina dolls in Japan. Some online doll shops ship the dolls internationally.


﻿ ﻿
Famous examples of hanging ornaments for the Doll Festival include Sagemon(さげもん) in Yanagawa City in Fukuoka Prefecture, Tsurushi-kazari(つるし飾り) in Inatori area in Shizuoka Prefecture and Kasafuku(傘福) in Sakata City in Yamagata Prefecure.

﻿﻿﻿ ﻿﻿﻿
The hina dolls that have been handed down in the Honma family are on exhibit at the old main residence of the family in Sakata City, Yamagata Prefecture from February 21st to early April.

The Homma family members were wealthy merchants and large landowners.
There is a well-known phrase: "I never become a millionaire like Honma-sama. At the very least, I'd like to be a rich man like tono-sama(feudal lord)."

The family also expended private funds on public enterprises. The occupation forces enforced farmland liberation after World War II, and the family lost most of their land. Now the family is running a real estate company. The founders of Honma Golf Company are from a branch of this family.


﻿ ﻿ The family lent money to farmers at low interest rates with their farm land as collateral. Their payment deadlines were virtually non-existent. The family reduced the interest rates during times of famine. There was no struggle between the family and farmers.
However, the farmers became impoverished due to a series of disasters, and did a moonlight flit. Ironically enough, the family acquired their land and became a large landowner.

The owners of long-term companies have some common points.
For all their wealth, they live a simple life. They pay good money for their business and contribution to society, attend to their business, take advantage of acquired skills, don't dabble in speculation.

A member of the family said on a TV program that the three boys of the family lived in a single room although the Honma family was the Japan's largest landowner. Rich fathers' sons who lived high on the hog dissipated their fathers' fortune. However, such sons had a good eye for art. Some of them achieved great success as a painter.
﻿
﻿ ﻿ ﻿
The Doll's Festival comes from the custom of floating katashiro(a small human-shaped sheet of paper) in rivers or the sea after transferring one's impurity to it by rubbing oneself with it. The custom is called nagashibina.

The Nagashibina Festival of Mochigase(用瀬流しびな行事) will be held in Mochigase-cho, Tottori City, Tottori Prefecture on April 12th.

﻿ ﻿
﻿ ﻿
paper hina dolls on a straw basket for nagashibina