Winter peonies including Kan-botan(寒牡丹) and Fuyu-botan(冬牡丹) are now at their peak at many gardens in Japan.

﻿ Generally, Kan-botan(寒牡丹) is a kind of peonies that blooms both in spring and autumn. Gardeners make peony flowers bloom from late October to January by nipping buds in spring and leaving buds in autumn.

﻿ In the Edo Period, gardeners developed a winter-blooming variety of peonies. Kan-botan flowers are sensitive to meteorological conditions, so the rate of flower set is up to 20%. This species is difficult to cultivate. Few gardens have this species.
Fuyu-botan(冬牡丹)  is a spring-blooming peony that is forced to grow faster in a glasshouse.

Each tree has a straw cover for frost protection.

The Shin-en Peony Garden(神苑ぼたん庭園) in the Tsurugaoka Hachimangu Shrine(鶴岡八幡宮) is open from January 1st to late February. The period can vary with meteorological conditions. It seems that this garden has Fuyu-botan trees.

At Shakko-ji Temple(石光寺) in Nara Prefecture, Kan-botan flowers are at their peak from early December to early January. This temple has 300 Kan-botan trees of 36 different kinds.
﻿﻿﻿
﻿﻿﻿ ﻿﻿
Yotaku-ji Temple(永澤寺) in Hyogo Prefecture is famous for Hanashobu(iris). Its Fuyu-botan peonies are also beautiful.


Each tree has a straw cover for snow protection. 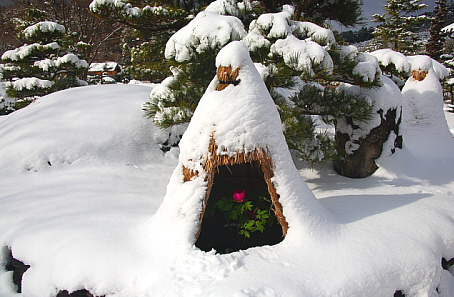 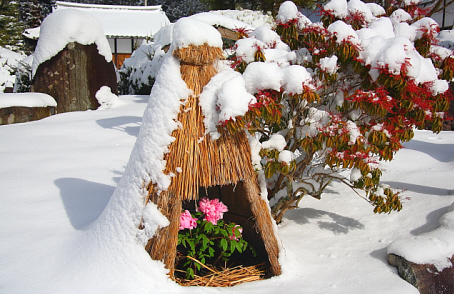 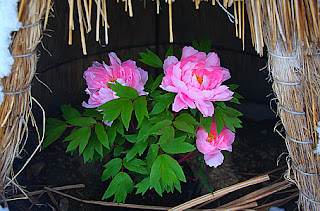 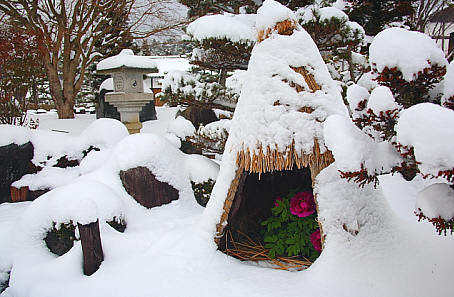 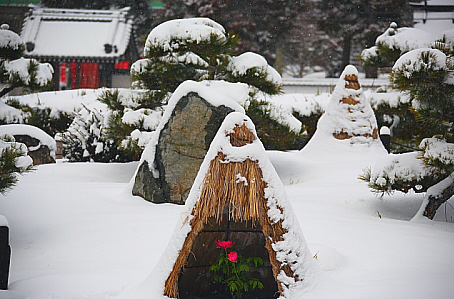 A shiba dog is waiting for its owner who is taking pictures.
The shiba dog(柴犬, Shiba Inu) is the smallest of the six original Japanese dog breeds which have been designated as a national natural treasure in Japan. DNA analysis suggests that endemic East Asian dog breeds including shiba are the oldest ones in the world.
Many people are keeping shiba dogs in Japan. I also like the shiba. Its curled tail is cute! 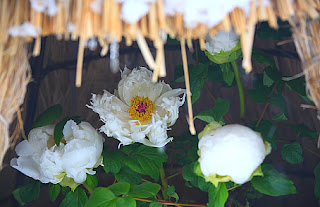 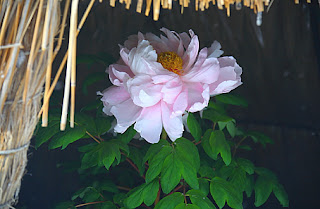 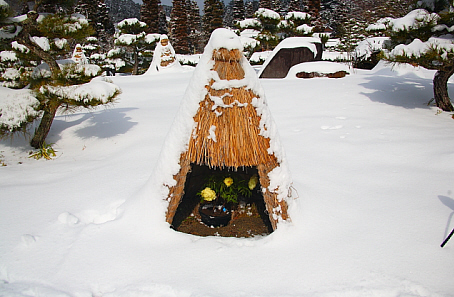 
Ornamental cabbages(葉牡丹, habotan) have been used as a ground cover plant forNew Year's decorations since the middle of the Edo Period. Habotan means "leaves like a peony." 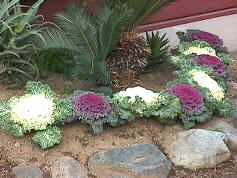 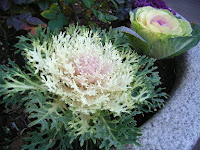 
﻿
﻿
In recent years, miniature ornamental cabbages are very popular as a cut flower or a plant suited to group plantings. A bouquet made of the cabbages looks like a rose bouquet.