A general congratulatory palace visit is held in the Imperial Palace on January 2nd. The Emperor and the imperial family wave to the people standing on a balcony five times.

﻿
﻿
Many people visit Shinto shrines or Buddhist temples during the New Year's holidays after the midnight of New Year's Day.


﻿
﻿
When drawing a sacred lot called omikuji(お御籤) to learn my fortune for the year, I have drawn a Super Unlucky fortune at Tsurugaoka Hachiman-gu Shrine (鶴岡八幡宮) in Kamakura before! I was at the critical age for a woman and was in an accident the next year.


﻿
﻿
Kazuto Ioka, the current WBC minimumweight champion, drew omikuji(sacred lot) at Sumiyoshi Taisha Shrine(住吉大社) in Osaka after retaining his title again. His lot predicted Super Unlucky(大凶, dai-kyo), but he is not disappointed.


Because he became a world-champion boxer after receiving Super Unlucky fortune at the shrine last year.

﻿﻿
﻿﻿
A visitor draw a wooden stick with a number on it from the hole of a hexagonal wooden box, tell a shrine maiden that number and receive a fortune written on a strip of paper from her. 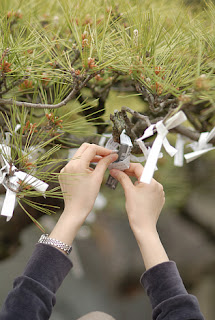 Visitors tie their fortunes onto the branches of nearby trees at shrines in the hope that a good fortune will come true or a bad fortune will be kept away.


﻿
﻿
Sacred arrows(破魔矢, hamaya) to exorcise evil spirits are sold in many Shinto shrines.

﻿
﻿
People offer sake to the gods.


﻿
﻿
January 2nd is the first business day of the year for most department stores and many retailers.

Many retailers offer deluxe gifts to shoppers in Sendai, Miyagi Prefecture. This custom dates back to the Edo Period, over 300 years ago.
An old established tea store offers Japanese tea chests filled with gifts.