The Story of the Futon of Tottori

We got our first snow later than usual in Tokyo and Yokohama on January 20 and had some snowy days. There has been more snow than usual in many areas this winter.

The Story of the Futon of Tottori is included in Glimpses of Unfamiliar Japan(1894) written by Patrick Lafcadio Hearn（1850-1904) whose Japanese name is Koizumi Yakumo (小泉 八雲.)


A merchant stayed at a new hotel in Tottori. He was the first guest at the hotel. He was woken up in the middle of the night by small children's voices from futon(Japanese-style bedding.)
"Ani-san(elder brother), you must be feeling cold. "
"Nay, you must be feeling cold."
After that, the hotel had racked up enough complaints from guests to get the hotel's owner involved.  He got information about that troubling futon from a bedding supplier.

The original owner of the futon was a poor family with two little boys living in a rent house. The chidren earned a living by selling household goods after their parents died. The futon was the only thing left from the goods. On the beginning day of Daikan, the children wrapped themselves in futon. A cruel landlord took their futon away from them as a substitute for their rent and kicked them out of their house. They were buried in a cemetery after being found dead.
The hotel's owner felt pity for them. He brought the futon to a temple and held a service for them. Since then, the futon has kept silent. 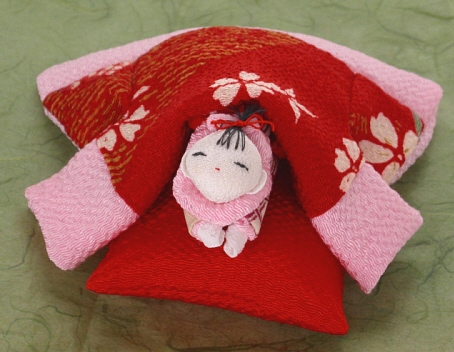 Kaimaki(掻巻) is a traditional kimono-shaped comforter wadded with cotton. The comforter retains heat because shoulders are encased in it. Now kaimaki-type blankets, down quilts are also available. 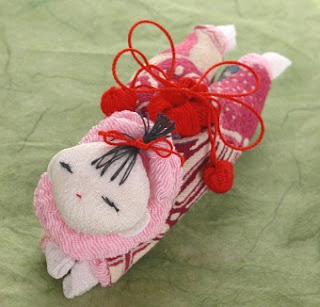 drawstring bag in the shape of crawling infant 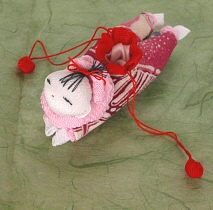 This picture is nearly as large as life.
The top of this bag is on the doll's back.
投稿者 ichinen 時刻: 10:43 PM