The annual National Center Test for University Admissions is being conducted throughout Japan on January 14th and 15th. The test serves as the preliminary hurdle for those seeking entrance to public universities.
﻿ ﻿

According a theory, the day of full moon was the original first day of the month and the 15th day of the 1st month was New Year's Day.
Ancient people had the custom of eating rice gruel with sweet adzuki beans on this day.

Sagicho(左義長) is an event held across the country on January 14th or 15th.

﻿People burn New Year's decorations or the first calligraphy works of the year to pray for good harvests, good health and the safety of families or to send the god of the New Year back to the sky by burning things related to Shogatsu.
﻿ ﻿
The event has 20 other names including Dondo-yaki(どんど焼き), Tondo-yaki(とんど焼き), Saito-yaki(さいと焼き).
﻿ ﻿
photo by City of Sendai 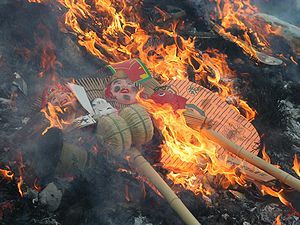