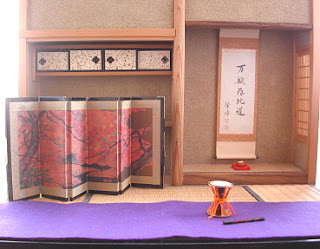 In the Heian period, noblemen in Kyoto enjoyed leaf-viewing.

An imperial autumn-leaves viewing party named Momiji no Ga(紅葉賀)  is described in the 7th chapter of "The Tale of Genji".  Musicians perform a variety of music on the boats. A large dragon's head or a bird's neck was attached to their bows. Selected dancers give performances. Hikaru Genji performs a dance named seigaiha(青海波) wearing colored leaves (and a chrysanthemum) in his hair.
Even now we can see the dance in the gagaku performance. Gagaku(雅楽) is Japanese traditional music and dance.
This year's foliage season will be from mid November to early December in Kyoto. Many good spots for viewing autumn leaves in Kyoto will be full of visitors. 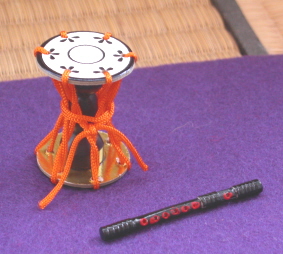 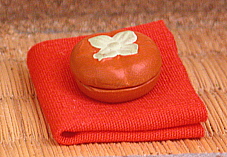 Kougou(香合:incense container) in the shape of kaki 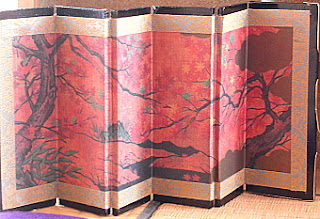 six-panel folding screen with a painting of colored maple leaves 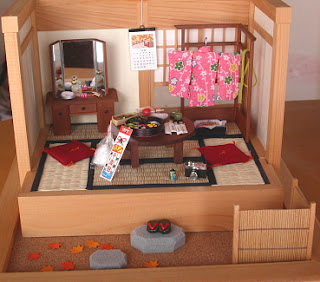 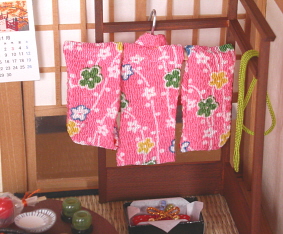 We can see chidren in formal dress on weekends around November 15th. I gradually became uncomfortable with securely-tied obi(belt) when I was a child and visited a shrine.

Chitose-ame(千歳飴) is a stick of red or white hard candy in a bag with a painting of auspicious symbols such as "crane and turtle" and "pine, bamboo and ume".
Chitose-ame literally means thousand year candy and its length symbolizes long life.  It contains rice and malt. It is made using malt to break down rice starch into sugar. 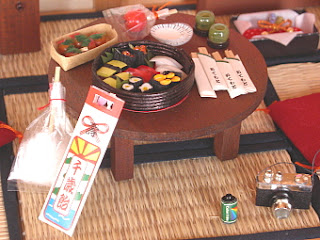 There are hand-rolled sushi on the table.

Ringo-ame(リンゴ飴:apple coated with sugar), Takoyaki(たこ焼き:octopus dumpling) and Wata-ame(綿飴:cotton candy) are sold from stands at a festival.

a pair of zori(草履:Japanese sandals) are placed on the step-stone.