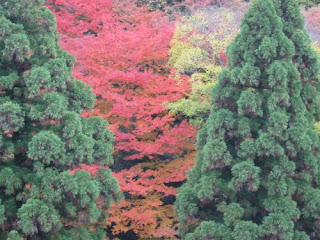 Now is the best time to view autumn leaves in Hakone or the Nikko Toshogu Shrine, and many viewing spots in Kyoto are also now at their peak. They are crowded with people enjoying autumn leaves. 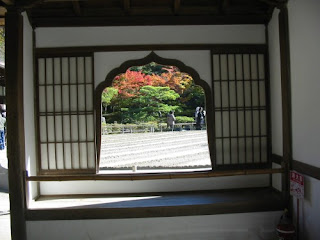 ﻿ 秋山の 黄葉を茂み 迷ひぬる 妹を求めむ 山道知らずも  (柿本人麻呂,「万葉集」)
"Trees ablaze with autumn colors were too rank in the mountain, so my wife lost her way, I want to go looking for her, but I am unfamiliar with the mountain path", written by Kakinomoto no Hitomaro(c.662-710) in "Collection of Ten Thousand Leaves".
﻿Actually, his wife has long been dead and buried in the mountain named Hikite no Yama. So she can't return home, and he can never see her again.
﻿
Even at night, many viewing spots including Kiyomizu-dera are illuminated.

This confection is a standard souvenir from Kyoto.
Some people say its name derives from Yatsuhashi Kengyo(八橋検校,1614-1685), who was an outstanding koto(Japanese harp)  player and composer. He established the modern koto music. Kengyo(検校) was the highest rank in the visually impaired and was of high social standing.

According to a theory, its name comes from the bridge made by combining eight boards in Yatsuhashi(now Aichi Prefecture), where Ariwara no Narihira(在原業平) who is the hero of "The Tales of Ise" makes a famous poem about kakitsubata(Rabbit-Ear Iris).

Yatsuhashi(八ッ橋) is a cracker in the shape of koto(Japanese harp).  Its dough is made by steaming a mixture of rice powder, sugar, cinnamon and water. Nama-yatsuhashi is sweet bean paste containing unground beans wrapped in the dough. Yatsuhashi is made by baking the dough.
投稿者 ichinen 時刻: 11:14 PM