Gencho or Inoko(玄猪 or 亥の子) is an ancient custom to eat rice cakes at the time of the boar(between 9 p.m. and 11 p.m) on the day of the boar in the 10th month in the lunar calendar.

An old literature says that people will be healthy all year round if they eat them on the day. It seems that the custom started in the Emperor's court, but the exact origin is unclear.

According to another theory, wild boars came to symbolizes a wish to be gifted with children due to their fertility. The families of samurai warriors valued fertility to carry on the family name, so Gencho was actively held in Edo Castle.

The rice cakes appear in "The Tale of Genji". They are served to Hikaru Genji and Murasaki no Ue(紫の上) on the day after their nuptial night.

Wild boar was thought to be a messenger of the god of fire prevention. People put heaters such as hibachi(火鉢, brazier) and kotatsu(炬燵) in rooms to pray for fire prevention on the day of the boar.
A kotatsu is a wooden low table whose frame covered with blanket. A table top sits on it and a heat source is placed under the table.

A pig-shaped burner for mosquito coil(蚊取り線香) is popular, but the burner is said to be boar-shaped to pray for fire prevention originally.

A confection named zenzai(善哉) is served in the Ura Senke school of the tea ceremony on this day. Zenzai is a sweet soup containing mixture of bean paste and unbroken beans with rice cakes or rice dumpling.

It is customary that one of Oribe wares is used in the tea ceremony on this day.  Oribe ware (織部焼, Oribe-yaki) is a type of Japanese pottery which features green copper glaze and avant-garde design.  Its name comes from tea master Furuta Oribe(古田織部, 1544–1615).
A confection named Oribe manju(織部饅頭) is also served on this day. 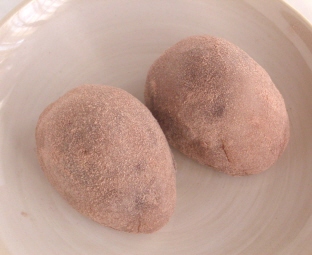