Kichirei Kaomise Kogyo(吉例顔見世興行) of kabuki is being held from November 30th to December 26th at Kyoto MINAMIZA Theatre. Kichirei(吉例) means a festive annual custom. Kaomise Kogyo(顔見世興行) is a show with an all-star cast.
At this program, several famous scenes of kabuki  are perfomanced by east(Tokyo) and west(Osaka, Kyoto) big actors such as Sakata Tojuro IV(四代目 坂田藤十郎), Nakamura Kichiemon(中村吉右衛門), Kataoka Nizaemon(片岡仁左衛門) and Bando Tamasaburo(坂東玉三郎).
The theatre have many signs called Maneki above the entrance. Each sign says a performer's name and his family crest in unique letters. Maiko wear a different hair ornament(花簪,hana kanzashi) every month. Its motifs include Maneki in December. Maiko have a kabuki actor who is appearing in Kaomise Kogyo sign his autograph on their hair ornament's Maneki.
In the Edo Period, Kaomise Kogyo was held from the 1st day of the 11th month to the middle of 12th month in the lunar calendar. Kabuki actors in those days signed a exclusivity contract with a theatre. The contract period was 1 year from the 1st day of the 11th month.

Sakata Tojuro I(1647–1709) was one of the founders of the Kamigata (Kansai) kabuki. Although Chikamatsu Monzaemon was a playwright belonging to a bunraku company, he was charmed by Tojuro's talent and wrote kabuki scripts for Tojuro. He returned to the bunraku company after Tojuro retired.


Important names in Kabuki are handed down from generation to generation, but no one succeeded to "Sakata Tojuro" after Sakata Tojuro III died in 1774. Sakata Tojuro IV, who is a Living National Treasure, commemorated his succession to the 4th "Sakata Tojuro" in 2005. His wife is a former actress and the former Minister of Land, Infrastructure, Transport and Tourism.
Ichikawa Ebizo(市川海老蔵) will not be appear on this stage because of injury including fracture of the zygoma and a front tooth by a violent incident during drinking. Some people blamed him for his inability to make commitments. He was given surgery yesterday.
His father, Ichikawa Danjuro XII(十二代目 市川 團十郞) apologized the staffs and co-stars for causing them so much trouble as the head of the Ichikawa family.


At this program, Ebizo was about to perform in two plays. One of them is named Uiro Uri(外郎売り:The Medicine Peddler).  It is a part of a play and is included in the Ichikawa family's repertoire comprising 18 classical Kabuki pieces(歌舞伎十八番). Ichikawa Danjuro II(二代目 市川團十郎) performanced when the play was was premiered in 1718.
The lines of Uiro-uri are read to speak lines smoothly at a training school for performers or announcers.
Kataoka Ainosuke(片岡 愛之助) is filling in for Ebizo.
We associate a confection with Uiro, but it was the name of a medicine originally. Even now, Uiro family in Odawara sells both a medicine and a confection named Uiro. Uiro is a family name.
Many people think of Uiro as the confection that is a bar of steamed cake made of rice flour and sugar and is a specialty of Nagoya. You can also give shape to Uiro. 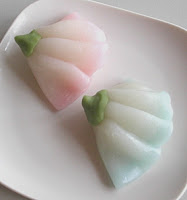