この上は徳様も死なねばならぬしななるが。死ぬる覚悟が聞きたいと、独言になぞらへて。足で問へば、うちうなづき。足首とつて、喉笛なで。自害すると知らせける。
"Toku-sama can only die. Is he prepared to die?" She confirms his willingness by poking him with her foot while pretending to talk to herself. He expresses his intent to die by holding her ankle against his windpipe.

どうで徳様、一所に死ぬる、わしも一所に死ぬるぞやいのと。足にて突けば、縁の下には涙を流し。足を取つて、おし戴き。膝に抱付き、焦れ泣き、女も色につつみかね。互いに物は言はねども。肝と胆とに応えつつ、しめり。
"I will die with Toku-sama no matter what." She conveys her decision to him by poking him with her foot. Under the porch floor, he sheds tears while enveloping her knees in his arms. She also weeps in sympathy. They communicate their feelings to each other without words.

"Sonezaki Shinjuu (曽根崎心中:The Love Suicides at Sonezaki)" is a bunraku play, which was written by Chikamatsu Monzaemon(近松門左衛門) based on an actual incident that Tokubei(徳兵衛), then a 25-year-old sales clerk, and Ohatsu(お初), then a 21-year-old courtesan, commited suicide together in the forest of Sonezaki. 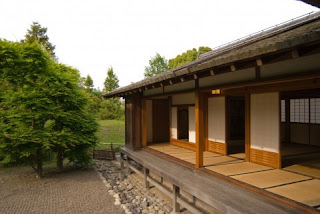 engawa(縁側):
A veranda-like(or wood deck-like) porch called engawa has the space under its floor. Ohatsu hides him under the porch floor.

He remains there while Kuheiji, who put Tokubei in the deep financial hole, is making advances to her sitting on the end of the floor.
"Toku-sama" is Tokubei's nickname.

In general female puppets have no legs, but it looks as if they have legs by foot puppeteer's handling.
Japanese women's legs were wrapped with kimono. So this play must have shocked audience with the scene he was holding her legs.

In the forest of Sonezaki, Ohatsu is frightened to see will-o'-the-wisp. Tokubei tells her, "Two will-o'-the-wisp floating side by side are our souls." She says, "Then we've been already dead..."

Chikamatsu depicts gory details in his plays. I wondered why the killing scenes in his plays were so real.
Because there was a superstition that a person who die a painful death can get to heaven. I heard it in a study session. I guess the superstition partly comforted deceased family members.
投稿者 ichinen 時刻: 11:43 PM

Email ThisBlogThis!Share to TwitterShare to FacebookShare to Pinterest
ラベル: BUNRAKU_chikamatsu