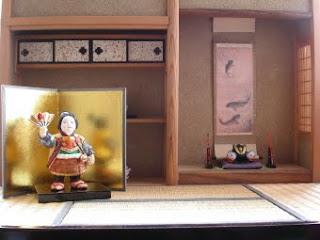 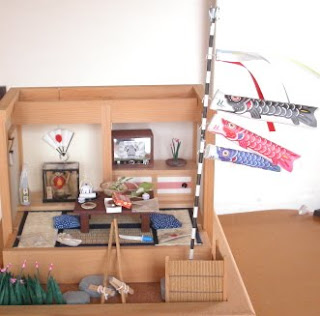 The Boys' Festival is celebrated on May 5th.
May 5th is Rikka(立夏:the first day of summer) this year. It's hot today.

It is originally called "Tango no sekku",which means the festival on the first horse's day of a month. In ancient China, the events including plucking medicinal plants, hanging dolls made of mugwort on the gate and drinking sweet flag(calamus) brandy (菖蒲酒) were held on the 5th day of the 5th month according to the lunar calendar to drive away evil spirits because the 5th day was thought to be an evil month.

In imitation of the Chinese custom, the similar event were held on that day at the Imperial Court. The events included drinking sweet flag brandy, thatching houses with sweet flag leaves or mugwort on the roof and hitting the targets from a horse galloping along the course.
Sei Shonagon (清少納言, c.966-1017) praised this scentful event in her famous essay "The Pillow Book (枕草子 makura no soshi)."

Sweet flags(calamus) has been regarded as a medicinal plant. Even now people take baths in sweet flag leaves on May 5th. 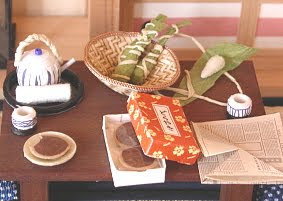 Chimaki(粽, zongzi or zong in Chinese) is on the table. It's a traditional Chinese food which is glutinous rice stuffed with fillings and wrapped in bamboo leaves.
it has an episode of Kutsugen(屈原:Qu Yuan in Chinese) who was a Chinese scholar and minister. After he drowned himself in the river because of being demoted, people threw packets of rice wrapped in Melia azedarach leaves and five-colored strings into the river. There are various theories as to its reason and shape.
In Japan, we eat a confeciton made from rice-powder wrapped in bamboo leaves on May 5th. 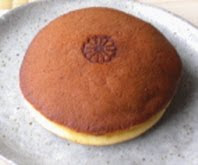 Dorayaki(どら焼き) is also on the table.
It's sweat bean paste in pancakes and got its name from its resemblance to dora(銅鑼, Chinese gong).It is said to have begun around 1700. However, it has nothing to do with the Boys' Festival.
Recently, it's famous as a Doraemon's favorite confection. Doraemon (ドラえもん) is a character from Japanese manga and animation.
Another confection with the same name is sold at a Japanese confectionery shop, Sasaya Iori(笹屋伊織) founded in 1716, in Kyoto. The shopmaster created a confection to be baked on the heated dora because To-ji temple's monk ordered to make a snack for the temple's monks. 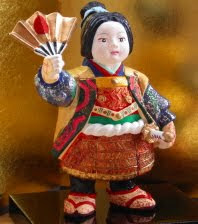 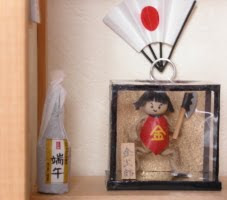 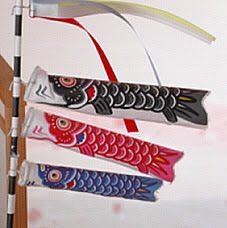 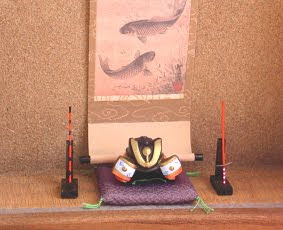 The warrior class was in a position of power in the Edo period.
Syoubu(尚武), which means valueing martial arts, have the same sound as syoubu(菖蒲).
So families of samurai warriors began celebrating May 5th as the day for boys.
Families with boys display warrior dolls, famous heroes such as Kintarou(金太郎), miniature samurai armor, helmets in their homes and fly carp streamers outdoors to represent strength and success. It comes from a Chinese tradition that carps turn to dragons after swimming up a waterfall.
Families of samurai warriors flew their family banner called nobori(幟). In rivalry with them, ordinary people began to hoist carp streamers.

There's a bow and a sword on both sides of a samurai helmet.
Hanging scroll with a painting of carps. 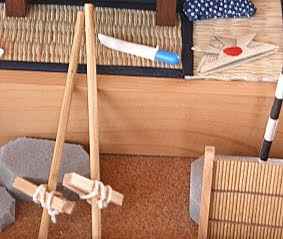