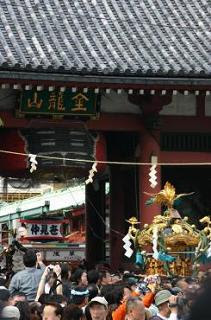 Sanja Matsuri(三社祭) is an annual festival held in the middle of May at Asakusa Shrine. "Sanja" comes from the three deities enshrined there.
Today is the last day of the three-day festival. Three mikoshi, which
are miniature mobile shrines for the three deities, are paraded through the city streets and back to the shrine.

The bad manner that some people ride on mikoshi has become a problem in recent years. Riding on the mikoshi is blasphemy against deities. In 2006, the poles on which people carry nikoshi were broken because some people rode on the poles. The following year, this sort of problem happened again. So the parade in 2008 was cancelled.
It seems that there was not a major problem with the this year's festival.

The festival have another troubles such as participating gangsters
(it cannot be broadcast on TV) or participants except shrine parishioners.
投稿者 ichinen 時刻: 11:51 PM