May 2nd is Hachijuu-hachi-ya(八十八夜), which is the 88th day after Rissyun(立春:the first day of spring).That day is regarded as a starting point of farm work and also
contains a warning against late spring frost. Tea picked on this day is regarded as superior one, and it is said that drinking tea on this day leads to longevity.

The first tea of the season has come. It possess a pleasing flavor.
Uji(宇治) City, Kyoto Prefecture, which is famous for its high-quality tea, tea picking starts at the beginning of May. Early varieties of tea badly were damaged by abnormally cold weather in some areas of Shizuoka Prefecture.

We associate the following faouns song for children called Chatsumi(茶摘み:tea picking) with Hachijuu-hachi-ya. It appeared in a songbook for children published in 1912, but its songwriter is unknown.

1. 夏も近づく八十八夜
野にも山にも若葉が茂る
「あれに見えるは茶摘みぢやないか
あかねだすきに菅の笠」
On Hachijuu-hachi-ya, summer is around the corner.
I can see fresh green fields and mountains.
"Look at the women over there. they are picking tea,
tucking up their kimono sleeves with a red band
and wearing a sedge hat."

2. 日和つづきの今日このごろを
心のどかに摘みつつ歌ふ
「摘めよ摘め摘め摘まねばならぬ
摘まにゃ日本の茶にならぬ」
Having a spell of lovely spring weather,
they are picking tea pleasantly while singing a song.
"Pick tea, pick, pick, you need to pick tea.
If you don't, Japanese tea leaves are not made."

Tea processing in Japan is, in brief, picking tender new leaves, steaming them while stirring, kneading them while drying on low heat and finishing them. Kneading work is so hard that tea leaves kneaded by hand are very expensive. 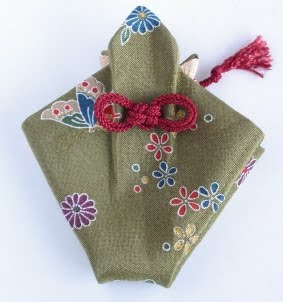 Chatsubo(茶壷) is a pottery tea jar and the pouch has a traditional design.

Tea of the very best quality in Uji(宇治) were sent to shoguns in procession from late April to early May, from 1633 to 1866 every year. The authoritative procession was called Ochatubo-doucyuu(御茶壷道中) and even feudal lord's processions had to give way to it. Commoners are not allowed to see it. A children's song "zui zui zukkorobash(ずいずいずっころばし)" is written about it.

Tea manufacturers including Ippodo(一保堂),Kanbayashi(上林), Nagatani-en(永谷園) and Yamamotoyama(山本山) managed everything about the procession.
The supervisor of it was Kanbayashi, which has been in business for 450 years and has brought out Plastic bottles of green tea named Ayataka(綾鷹)in cooperation with Coca-Cola(Japan) Company, Ltd.

Ippodo(Ippodo Tea Co.,Ltd.) was founded in 1717. The site of Ippodo presents information about tea in English and Japanese. You can also buy tea and tea utensils such as Matcha Starter Kit, teapot on the Internet. They are available in countries outside of Japan.

Yamamotoyama(YAMAMOTOYAMA Co.,ltd.), which was founded in 1690, has also become a major company and is famous for tea and nori(laver) now. Its founder developed process of making refined green tea (玉露,gyokuro).

May 3rd is Constitution Memorial Day(憲法記念日).
the present Constitution of Japan was enacted on May 3rd in 1947.
It makes a feature of war-renouncing Article 9.
投稿者 ichinen 時刻: 11:46 PM