Ceremony of the Utakai Hajime

Utakai Hajime (Imperial New Year's Poetry Reading) was held at the Imperial Palace in Tokyo on January 14. The reading of traditional tanka poetry is convened by the Emperor. Although its exact origin is unclear, the oldest recorded ceremony was held on 15 January 1267.
This year's theme was "光(hikari:the light)", which was announced by The Imperial Household Agency shortly after the ceremony in the previous year finished.
Today, the general public can apply for its selection. People whose tanka poems were chosen are able to attend the ceremony and their poems are recited at the Imperial Palace in the presence of the Emperor and Empress. At the end of the ceremony, the poems of the Imperial Family, the Emperor and Empress are recited.
This ceremony is televised live on television. The next year's theme is "葉(ha:the leaf)". 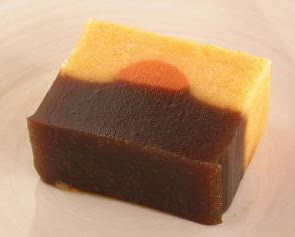 御題菓子(gyoudai(odai)-gashi:confection associated with this year's theme):
this confection named goraikou(ご来光) represents the first sunrise of the year. 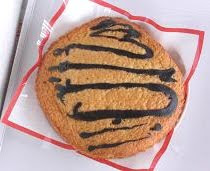 干支菓子・虎(eto-gashi,Tora):
This confection feature this year's zodiac sign, the Tiger 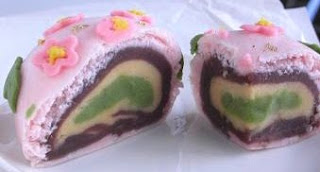 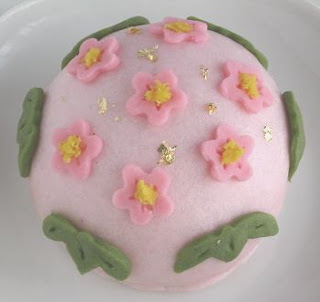 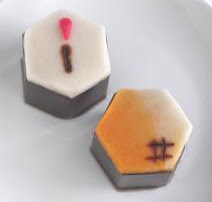 鶴亀(tsuru-kame:crane and turtle):
Both of them are considered to be a symbol of longevity. 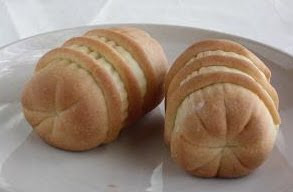 福俵(fukudawara):
A straw bag of rice represents a wish for a good harvest. 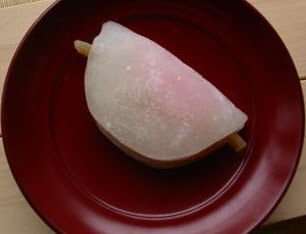 花びら餅(hanabira-mochi):
Hatsugama(初釜) is the New Year's first tea ceremony. This is a kind of confections served in some tea ceremony schools at Hatsugama. Originally, it was permitted to eat only at the imperial court. In the Meiji Period(1868-1912), a school of tea ceremony asked for permission to use hanabira-mochi at Hatsugama, it was allowed to do. Another schools use manju that are steamed sweet made of Japanese yam filled with sweet bean paste. 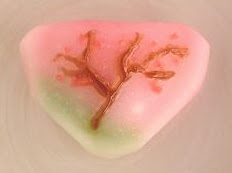 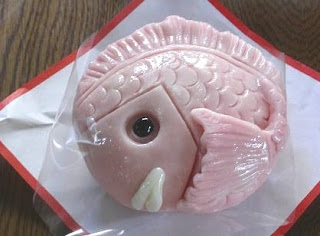 鯛(tai:sea bream)
The Japanese word for sea bream, tai, sounds similar to the word "mede-tai" or "felicity" and, what is more, it is auspiciously red in color.
投稿者 ichinen 時刻: 11:10 PM