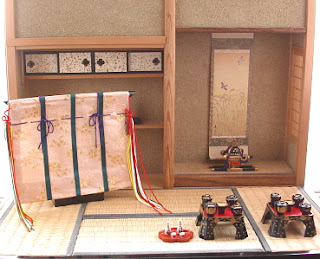 The 10th month in the lunar calendar(corresponding to November in the solar calendar) was named Kanna-zuki(神無月), when all of Shinto deities gather at Izumo-taisha (出雲大社, Izumo Grand Shrine) in Shimane Prefecture. Now many harvest festivals are held in October.  Most Japanese summer festivals derive from the Star Festival or the Bon Festival, and most autumn festivals are held to give thanks to deities for a good harvest in shrines.

It is said that several festivals such as Okunchi Festival in Nagasaki(長崎おくんち) come from Chouyo-no-sekku(重陽の節句), which is one of the five season-related celebrations and was celebrated on the 9th day of the 9th month in the lunar calendar(corresponding to October in the solar calendar). 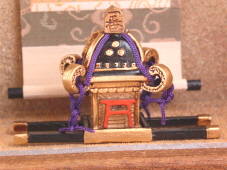 This hanging scroll shows tree sparrows with wing spread flocking to ears of rice. I remember rice paddies used to be put up sparkling tapes or nets to warn away sparrows. I haven't seen them recently.
It is presumed that the number of tree sparrows in Japan has dropped by 50 to 80 percent compared to 1990.
Tree sparrow nests in a narrow gap such as a space between roof tiles and a roof, but less houses have tiled roofs due to earthquake countermeasures. There is decreased green space where tree sparrow can feed itself. 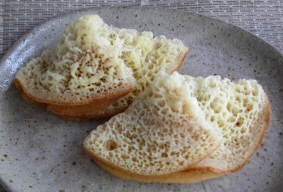 Kikkoudou(橘香堂) in Kurashiki(倉敷) of Okayama Prefecture started selling a confection named murasuzume(むらすゞめ) which was modeled after a tree sparrow with wing spread in 1877.
The confection has distinctive appearance due to using ammonium carbonate. 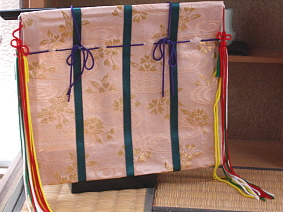 Kichou(几帳) is a partition that a cut of silk cloth is hung on a wooden bar. It was used at aristocrats' houses and we can also buy now. 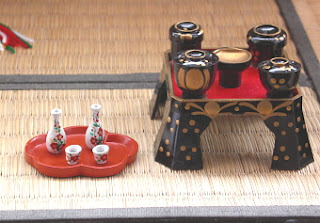 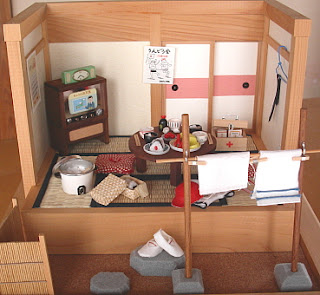 Health and Sports Day (体育の日) is a national holiday in Japan.  The day was designated in 1966 to commemorate the opening day of the 1964 Tokyo Olympics.
It was held on October 10th, but the day was moved to the second Monday in October in 2000.  The day was chosen for the Tokyo Olympics because October 10th is what meteorologists call a “singular fine day" in Japan.
Most schools and organizations used to hold their athletic meetings on October 10th. Many companies used to hold it and I took part in it. 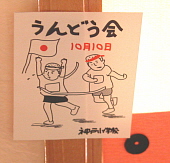 There are a gym uniform,a red cap and headband on tatami mats.
"Red and White" often means opposing two groups in games. It is said that it comes from the battles between the two clans of Genji and Heike. The Minamoto clan(源氏, Genji) flew white flags and the Taira clan(平氏, Heike) did red ones. 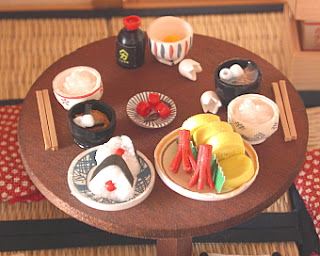 Soy sauce and a broken egg and its shell are placed on the table.
Tamago-kake-gohan(卵かけごはん) is a meal composed of a raw egg mixed with white rice, often seasoned with soy sauce. Recently we can buy a special soy sauce for tamago-kake-gohan at supermarkets.
The expiration date of eggs in Japan shows the date suitable for eating raw.
pieces of rolled egg(卵焼き, tamagoyaki) and sausages in the shape of octopus(たこさんウィンナー, tako-san wiener) are served on a plate. Both of them were popular dishes for children's boxed lunch in Japan. You can make tako-san wiener by frying sausage with some lengthwise cuts.

In the center of the table and in rice balls, there are umeboshi(梅干:pickled ume). The tartness of the pickled ume stimulates the appetite and prevents food poisoning, so people often place them in rice balls and boxed lunches.

The clinical tests at three hospitals including Jikei University School of Medicine demonstrated that ume extract reverses liver damage.
Shoichi Adachi(足立正一), who is a developer of drug about the immune system, tested some ume ingredients to see how they affect oral sarcoma of his dog. He gave the dog milk laced with ume extract, and cancer cells in his dog became necrotic. I watched the report on the NHK TV program named "asaichi". However, demonstration experiments about it are not held. 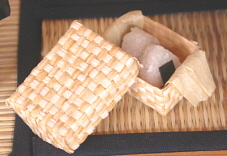 A woven basket contains triangular rice balls with a sheet of dried laver wrapped in a bamboo sheath. Making rice ball and hand-rolled sushi(にぎり寿司, nigiri-zushi) are not as simple as it seems.
Rice balls keep their shape better when being held with a hand, but they unravel when entering a mouth. There is a knack in making them. 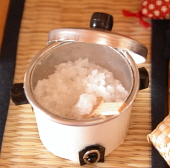 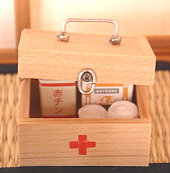