Jusanya(十三夜) means the night or the moon on the 13th day of the 9th month in the lunar calendar(corresponding to October 20th of this year in the Gregorian calendar). Jusanya is twinned with Jugoya, so Jusanya is also called Nochi-no-Tsuki(後の月, later moon).

Unfortunately, I can't see the moon tonight.
We can't worry about that now. Amami Area is being ravaged by torrential rains due to the typhoon No.13(Megi) and stationary autumn rain front.  The area received up to 647 mm of rain ever recorded in a 24-hour period, 131 mm in a 1-hour period. The total amount of rainfall reached 800 mm or more since it began to rain. Amami area had a record-high rainfalls. Heavy rain complicates rescue efforts.

I expresse concern about the damage from the typhoon No.13 in the Philippines. The typhoon is on its way to China. I hope that people in southern China will be safe.

Moon Viewing on this day is unique to Japan and is also called Mame-meigetsu(豆名月, bean harvest moon）or Kuri-meigetsu(栗名月, chestnut harvest moon).
Newly harvested beans started to reach the market, but they are smaller than usual due to the searing summer.

There are different stories about the origin of Jusanya. It is said that this custom started in the Imperial court.
People were unwilling to hold only one of the two moon-viewing events, Jugoya and Jusanya, as katamizuki(片見月: partial moon viewing). 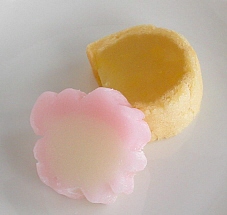