Kannamesai(神嘗祭) is a festival held by the Imperial court from October 15th to 17th.  The emperor dedicates newly harvested rice to Amaterasu-Ohmikami, the Goddess of the Sun, an imperial ancestor. The festival used to be held on the 17th day of the 9th month in the lunar calendar. It was held on September 17th after the solar calendar was adopted since 1872.  However, the harvested rice couldn't keep up with the day's festival, so it has been held on October 17th since 1879. 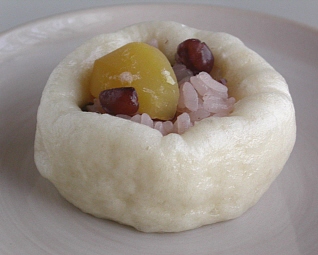 Sekihan manju(赤飯饅頭)
This confection has nothing to do with Kannamesai.
Sekihan and chestnut on the buns.
Sekihan(festive red rice) is made by steaming glutinous rice together with red beans which colored the rice.
投稿者 ichinen 時刻: 11:07 PM