Okunchi Festival in Nagasaki is held from October 7th to 9th. Okunchi Festivals are held to give thanks to deities for a good harvest in Kyusyu Region. Some of them are also held on the 19th day and the 29th day.

It is said that the festival dates back to 1634, when two women danced in dedication to the god of the Suwa Shrine in order to suppresse Christianity.

(Refer to the blog post under the date of August 9th for the suppression of Christians in Nagasaki.)
Nagasaki was the only Japanese city that was allowed to trade with foreign countries during the period of national isolation.

The city has a historically close relationship with China. So a dragon dance, one of the features of the festival, is performed.
(The events related to China are being perfomed as usual in Japan. The celebration of China's National Day was also held as usual in Yokohama's Chinatown on October 1st.)

Shippoku-ryouri(卓袱料理) that originated in Nagasaki is a fusion of Japanese, Chinese and Dutch cooking. Platters for share are served to guests at the round table.

Nagasaki champon (長崎ちゃんぽん) is a noodle dish originated from China.

Castella (カステラ, Kasutera) also originated in Nagasaki and is a popular Japanese sponge cake without edible fat such as butter. The name is derived from Portuguese Pão de Castela. It was introduced to Japan in the middle of the 16th century.
Fukusaya(福砂屋), which was founded at Nagasaki in 1624, is famous for its moist castella.  In a dramatic re-enactment, a kind of Dutch ovens was used to bake the cake at the end of the Edo Period.
There are various ways to make castella. They come in a variety of textures. It was hard for me to make castella under controlled temperature. 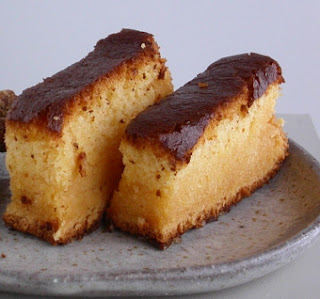 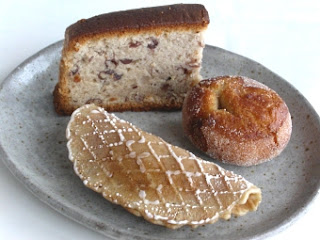