The first snow of the season fell in some areas of Hokkaido.

The Osaka District Meteorological Observatory announced that Kogarashi-ichigou(木枯らし1号, the first cold wintry wind of the year) blew seven days later than last year in Kinki Region including Osaka. Kogarashi-ichigou was announced only about Kanto Region(Tokyo) and Kinki Region(Osaka).
It is the first north winds of over 8 meters per second between mid October and the end of November when pressure pattern shows high barometric pressure to the west and low pressure to the east.

In Amami Oshima (奄美大島), many Okinawa habu(Yellow spotted pit viper) have been seen due to torrential rains.

October 26th is Kaki(Japanese persimmon) Day that the Kaki Group of the National Fruit Tree Research Association invented in 2005. This day was established based on the following very famous haiku poem that Masaoka Shiki(正岡 子規, 1867-1902) composed on a trip to Nara on October 26th in 1895.

Nara Prefecture is still a main kaki producer.
The day is not well known, and I also recently learned of it. Kaki is unpopular with the young. People used to plant kaki trees in their garden, but there aren't many kaki trees in the gardens of newly-built houses. Kaki fruits are currently on the market, but they are not yet ripe enough to eat in my area. 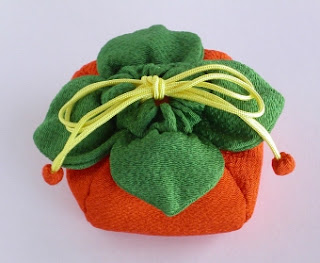 
Kaki is rich in vitamin C, polyphenol and kalium. Removing the astringent taste is necessary for many kinds of kaki.  Its astringent taste is identified as persimmon juice(tannin).
Persimmon juice has been used since long ago as water resisting agent, strengthening agent and antiseptic agent by coating wooden tubs, Japanese paper, wooden building materials and fishing nets of natural materials.

It is also used as clarifying agent in the process of sake brewing.

Tanned papers are essential for Edo-Kommon(江戸小紋).  Kommon are fabrics dyed by cut paper stencils which have fine patterns. Those patterns look unpatterned from a little distance because of their elaborate designs.

The cut paper stencils are called Ise-katagami(伊勢型紙), which were made in Ise(now Suzuka City) and were sold by merchants of Ise under the Kishu domain's aegis. They had a nationwide distribution network. Now the six artisans of Ise-katagami are designated as Living National Treasure, but the production of Ise-katagami has dropped significantly due to kimono's unpopularity and improved technology.

Persimmon juice has natural infection-fighting properties, so antibacterial goods containing it are on the market.
投稿者 ichinen 時刻: 11:48 PM