Few people could see the new year's first sunrise because it was a snowy or rainy New Year's Day in many areas. People also saw the sunrise in the Edo Period.

Many people visited a shrine or a temple today.
I slept in, ate New Year's dishes, got New Year's cards and sent replies to them. 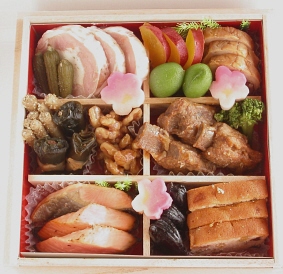 Ready-made New Year's dishes. These include many untraditional ingredients. 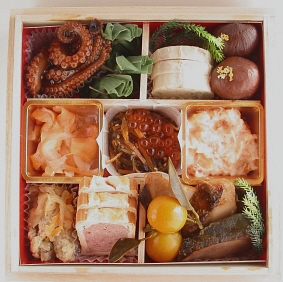 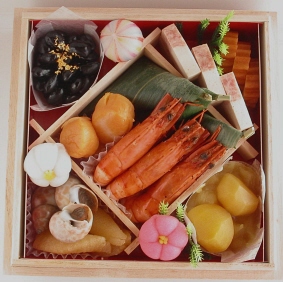 Both ends of the chopsticks for New Year holidays become narrow to share New Year's dishes with the deity of the year. 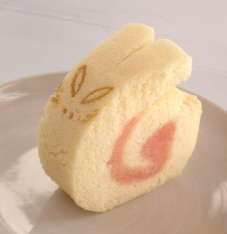 Swiss roll containing bean paste and printed a pattern of the rabbit.

This is the year of the Rabbit, according to the Chinese zodiac. Each of the 12 Chinese zodiac signs is related to a characteristic animal such as a rabbit and a tiger.

Decades ago, everything was closed during the first three days of the new year.  In the Edo Period, most commoners spent all day doing nothing on New Year's Day.

They got some water from a well in the early morning, made soup containing vegetables and rice cakes for New Year's Day called ozouni(お雑煮) and drunk New Year's spiced sake called toso(屠蘇) on New Year's Day.

They were not supposed to clean their house, got angry and scold a servant during the first three days of the new year.

One year has passed since I started this blog.
Thank you and best wishes for a happy new year.
投稿者 ichinen 時刻: 11:50 PM