Utakai Hajime (Imperial New Year's Poetry Reading) was held at the Imperial Palace in Tokyo on January 14. The reading of traditional tanka poetry is convened by the Emperor.
This year's theme was "葉(ha: the leaf)" and next year's theme is "岸(kishi: the shore)". 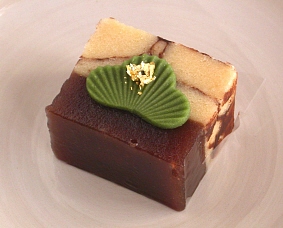 Gyodai(odai)-gashi(御題菓子:confection associated with this year's theme)

This confection is named Oimatu(老松: old pine). Pines have been reagarded as a sacred tree and a symbol of longevity in Japan since ancient times. Old pines are stately.
投稿者 ichinen 時刻: 11:42 PM