The Japan Meteorological Agency announced that Kogarashi-ichigou(木枯らし1号, the first cold wintry wind of the year) blew in Kanto Region on October 26th.

I send my deep sympathy and prayers to the quake victims and their families in Turkey, and I hope the floodwaters in Thailand recede as soon as possible and that there would be no more damage.


What happened to the the passangers on board trains in Tohoku when the Great East Japan Earthquake occurred on March 11th?
None of the passangers was killed by the quake and tsunami while aboard a train.

Twenty seven Tohoku Shinkansen trains were running when the quake occurred. One of them was running at 270 kilometers per hour. All of them stopped safely due to the Urgent Earthquake Detection and Alarm System (UrEDAS). The system automatically braked the trains 9 seconds before the quake's first shaking arrived. So the decelerating trains didn't derail, but a deadhead train during test run derailed.

Then, it is estimated that between 40 and 50 trains were running on the conventional lines serving Tohoku Region. JR rail routes including Hachinohe, Yamada, Ofunato, Kesennuma, Ishinomaki, Senseki and Joban lost 23 stations because of tsunami.

The quake occurred after a four-car Joban Line train arrived at Shinchi Station in Fukushima Prefecture. There were about 40 passengers including two policemen in suit on the train. The two policemen were on their way from a police school to Soma Police Station, their posting.

Watching TV on a passenger's cell-phone with One-Seg functions, the passengers learned that Large Tsunami Warning was issued. The station is located 600m from the coast, so one of the policemen judged on the instant that tsunami would rush toward the station. He suggested heading for higher ground 1 kilometer from the station, but an elderly woman insisted on waiting for her family members to arrive at the station. He talked her into evacuating.

The passangers walked to higher ground with him in the lead. The elderly woman couldn't walk fast because of having weak legs, so the other policeman went with her. Ten minutes later,  the policeman and the woman were left far behind. He turned around and saw that tsunami was 200m away from them. Shinchi Station and their train had already been engulfed by tsunami. He stopped the passing pickup truck and they hitched a ride on the truck. Thirty minutes later, they reached the higher ground. The safety of all the passangers was confirmed.

For a moment, it crossed their minds that a tsunami might not hit this area. However, they put the school's teachings into practice. They did what police officer should do.
After that, the two officers were assigned to search for missing persons.

The quake occurred shortly after a four-car Senseki Line train left Nobiru Station in Miyagi Prefecture. After leading its passangers to an evacuation spot(elementary school), its conductor walked to Sendai, about 30 kilometers away from the station. All communication to the disaster area had been cut off, so he could only walk to report on the present situation. The next day, he reached Sendai. The train was found in a residential area.

The quake occurred shortly after a Kesennuma Line train left Matsuiwa Station in Miyagi Prefecture. The line is right by the sea. The train stopped on the 5-meter-high elevated bridge. Three female high-school students on board the train saw that seawater was drawing back, the seabed which are normally submerged was being exposed and fishes jumped up and down.  JR's direction center gave the train's driver directions, and the driver urge the train's passangers to get out of the train and head for higher ground. The passangers disembarked from the train by turns.

The students were heading in the direction of the house of one of them, but the driver chased after them and said, "Don't go that way! Head for higher ground at the next railroad crossing." They ran desperately and got separated. Two of them saw tsunami going across in front of them on national route 45. They ran for their lives to higher ground. They reached a junior high school on higher ground and joined together.

One of them said, "I owe him my life." She was truly grateful for the train's driver. The train's passangers were all evacuated from the train, but their safety after evacuation was not confirmed.

The Sanriku Railway resumed passenger service on the fifth day after the quake and anyone could ride its trains for free. Now the railway offers discounted fares. Many railfans throughout Japan has been supporting the railway.

One train is stranded at Fudai Staion on the North Rias Line. The station is on the damaged section. Local residents wrote messages on daruma dolls and put them on the train's seat so that the train didn't feel lonely. Local people have a deep emotional attachment to the Sanriku Railway. 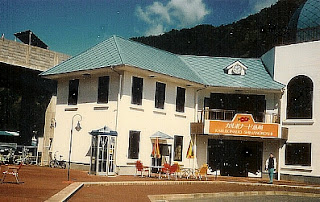 They disappeared on March 11th.

﻿ The quake occurred shortly before a two-car Yamada Line train arrived at(or left) Tsugaruishi Staion. There were about 20 passengers and crew members on board. JR's direction center informed the train's driver that large tsunami warnings were issued, and the center ordered the suspension of the train's departure and evacuation of its passangers.


The crew members led the passangers to an evacuation spot(elementary school), but the tsunami rushed toward its schoolyard. The passangers followed the directions of a member of a local fire company to escape to the hill behind the school.
The train was swept up and derailed by the tsunami.

The quake occurred shortly after a two-car Ofunato Line train left Ofunato Station. The crew evacuated the passangers on report of issuance of large tsunami warnings. The train happened to stop on slightly higher ground, so it remained. The tracks in front and back of the train were engulfed by the tsunami. A part of the roadbed was undermined. Unfortunately, the train was dismantled in July.

A freight train on Joban Line was carrying 20 containers. Its driver stopped the train after receiving the train protection radio warning. Soon after that, the big shake occurred. He struggled to reach JR's train control center on his cell-phone but had trouble contacting the center. Then, tsunami rushed toward the train. The engine car shaked. The containers and flatcars were 30 km away from the engine car. He waited there for a while, but he decided to escape from the train. Because big shakes repeatedly occurred and he heard an announcement that over ten-meter high waves would hit his area over Municipal Disaster Management Radio Communication Network.

He walked to a private house while dipping his body in the cold water up to his neck and went upstairs. He got a call on his cell-phone from the center and let the center know his safe. He spent a night in the house, and he moved to a secure location because the water began to recede.

The government expects to cover half of the restoration costs of the third-sector railway companies in tsunami-hit areas including the Sanriku Railway and to cover the other half by offering subsidies to local governments which have a stake in the companies.

About 80 domestic flights and 8 international flights were scheduled to arrive and depart at Sendai Airport on March 11th this year. Fortunately, no passenger plane stayed at the airport at 2:46 p.m. when the quake occurred.

Japan Airlines Flight 2209 from Osaka(Itami Airport) was scheduled to arrive at 2:45 p.m., but it was delayed due to bad weather. The quake occurred soon after the flight departed 1 hour later than one expected. The flight turned back to Osaka.

An IBEX Airlines plane conducted landing training, but it was up in the air at 2:46.

The airport terminal building was a designated safe shelter, so many local residents fled to the airport.
After Large Tsunami Warning was issued, the staffs of a special nursing home shuttled 96 elderly people back and forth to the airport. Elderly people and staffs were all evacuated at 3:53 p.m.

About 1,600 people including passengers, local residents, airport staffs and the staffs of related facilities were kept in isolation.
The airport came in from the cold at around 4:00 p.m. on 12th.

At a Civil Aviation College's Sendai branch adjacent to Sendai Airport,  a trainer aircraft was about to land at the branch's airport when the quake occurred. The controller told the pilot to overshoot the runway, so he pulled up the nose of the aircraft. This and other trainer aircrafts were stacked. All of them in the stack were cleared into Niigata and Fukushima airports.

At the Japanese Coast Guard air station adjacent to Sendai Airport, repeated shakes prevented the aircrafts in the air station from taking off. So four aircrafts were swept up by the tsunami.

Although there was no human damage, more than 40 aircrafts belonging to air facilities around Sendai Airport were swept up by the tsunami.
投稿者 ichinen 時刻: 1:14 AM