The Nagasaki Kunchi Festival(長崎くんち) is being held from October 7th to 9th. It is said that the festival started in 1634 when two prostitutes danced in dedication to the god of the Suwa Shrine.

It is said that kunchi means kunichi(九日, ninth day) and derives from the Double Ninth Festival(重陽の節句, Choyo no sekku) celebrated on the ninth day of the ninth month in the lunar calendar(corresponding to October in the Gregorian calendar.)

Festivals called kunchi take place to thank deities for the autumn harvest in Kyusyu Region. Some of them are also held on the 19th day and the 29th day.

Fifty nine towns in Nagasaki City are divided into seven groups. Each group performs once every seven years.
This year's performing towns and their floats(performances) are as follows:

You can see these town's performances in 2004 on this site.
Here is the movie of Kokkodesho in 2011 Nagasaki Kunchi Festival on the "Nagasaki Guide" Web site.
festival guide in English - Guide1 and Guide2

Nagasaki was the only city that was allowed to trade with foreign countries during the period of national isolation. So these performances show a strong influence of overseas cultures such as China, Holland and Portugal.

The Chinese Consul-General in Nagasaki serves as the director of Daikoku-machi's Chinese ship this year. The Nagasaki-Shanghai line will enter service this autumn.

The audience shout “Mottekoi!(もってこい)" to the performers when the audience would like to call them back on the stage for encore. 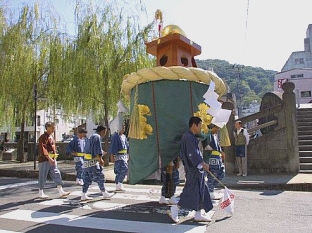 Each town's float and performers are led by its Kasaboko(傘鉾) which serves as a symbol of the town. 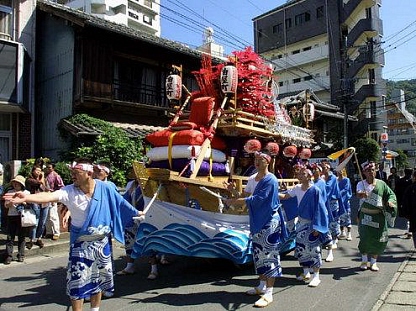 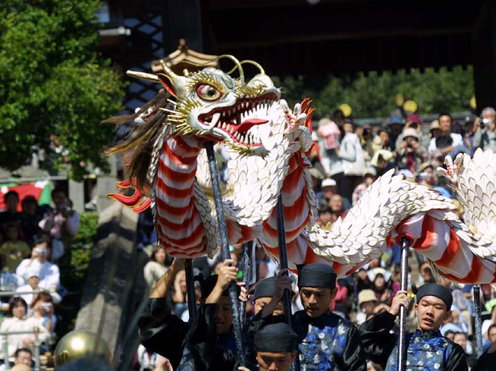 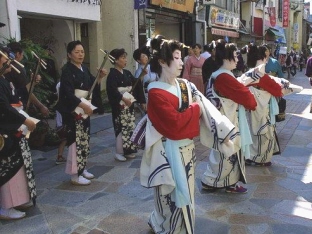 
The preparation for the festival starts in June 1st. The performers in these towns pray for a safe festval and start to practice their performances on this day. On October 3rd, each of performing towns displays its costumes, props, instruments and gifts for performers to the public. On October 4th, the performers have a rehearsal.

For three days starting from October 7th, these floats and performers visit private homes, offices and shops and briefly perform to usher in good fortune after performing at four places including Suwa Shrine. They go to different places between 800 and 1000 a day and do a longer performance in a large place such as a bank office. Later, the performers get tips from visited places.
投稿者 ichinen 時刻: 1:11 AM