It snowed in some areas in Tohokku and Hokkaido yesterday. It's a little cold due to rain. Today's high was 18 degrees Celsius in Yokohama.

"which should I visit for Yaku-yoke(厄除け), a Shinto shrine or a Buddhist temple?"
"Visit whichever you like."
We oftentimes hear this question. It makes no difference if you visit a temple or shrine for Yaku-yoke.

Yaku-yoke or Yaku-barai(厄除け or 厄祓い) is an exorcism. Many people ask a shrine or temple to perform an exorcism at their critical ages. In general, 25, 42, 61 for men and 19, 33, 37 for women are critical ages. Their ages are based on East Asian age reckoning.  Everyone used to add one year to their age at New Year's in Japan.

It is thought that the exorcism comes from Onmyodo(陰陽道). Onmyodo derived from the Chinese theory of Yin-Yang and the five elements, but it developed independently from the original style in Japan. It includes telling people's fortune with oriental astrology and performing an exorcism on the basis of natural science.

"Onmyoji(陰陽師)" who mastered the secret of Onmyodo was a job title in the Imperial court and the most famous onmyoji was Abe no Seimei (安倍 晴明, 921-1005).
Onmyoji played a role like a feng shui master in the earliest years, but they came to perform magico-religious rituals.  With the rise of samurai class, they fell in decay and Onmyodo became popular among the public. In the Edo Period, would-be onmyoji were rampant.  Temples and shrines came to hold the ritual. Onmyoji maintained their power under the wing of the Tokugawa Shogunate, but the Meiji Government regarded onmyodo as a superstition and prohibited spreading of onmyodo in 1872.
﻿
﻿
Seimei Festival(晴明祭) in Kyoto was held at Seimei Jinja Shrine(晴明神社) on September 22nd and 23rd.


﻿
﻿
Abe no Seimei  is enshrined in this shrine. It is said that the shrine was built on the site of Seimei's house in 1007.

﻿
﻿
September 26th is the anniversary of the death of Abe no Seimei, and a ceremony was held at Sagano(嵯峨野) in Kyoto on the day.


﻿
﻿
These ceremonies are not nationally-known, but he is very famous as an onmyoji.
A boom in onmyoji occured around 2000.﻿﻿﻿
﻿﻿﻿


He used pentagram(五芒星, gobousei) as a symbol of five elements. Onmyodo regards pentagram as a sign against evil. Pentagram is also used as a variation of family crests in the motif of balloon flower.


Ashiya Doman Ouchi Kagami(芦屋道満大内鑑) is a bunraku play written by Takeda Izumo(竹田出雲). It was premiered as a bunraku play in 1734 and as a kabuki play in 1735.
This play comes from the legend that a white vixen in the Shinoda Forest(信太森, Shinoda no Mori) had a son, future Abe no Seimei with Abe no Yasuna(安倍保名). The vixen was called Kuzunoha(葛の葉) or Shinodaduma(信太妻).

This legend has a theory that he got his supernatural power from his mother. Legend has it that a thousand-year-old fox turns to a nine-tailed fox spirit in China. Foxes are regarded as the messengers of the god at Inari shrines in Japan, and they were thought to have an uncanny ability to change themselves into humans.

Humans have the power to reason, but animals are driven only by emotion. So animals have a deeper affection than humans do. In this play, the lines of Kuzunoha shows that people of the time thought so.

Sakaki-no-mae(榊の前), an adopted daughter of Kamo no Yasunori(賀茂保憲), tries to select his apprentice Abe no Yasuna(安倍保名) as successor according to his testament. However, she is taken in by the tactics of her stepmother and uncle and is pushed into killing herself.  Yasuna who is her fiancee loses his mind.

"Yasuna(保名)" is one of kabuki dances based on this play. A scene of this play was made into a dance. I hear it's a difficult piece of dance. He wanders vaguely with her kimono. Although he is not of sound mind, his good upbringing must become evident in his every movement. Dancers must perform a sophisticated dance, expressing his love and grief.

He comes upon her sister Kuzunoha who is a look-alike for Sakaki-no-mae. He comes to himself and grows to love Kuzunoha. Then a white vixen appears in front of him. The vixen is saved by Yasuna. After that he is saved by the vixen disguised as Kuzunoha. Yasuna and the vixen live together and have a child. However, real Kuzunoha and her parents pay them a visit.

The highlight of this play is separation from a mother, Kuzunoha. On the contrary, the other scenes of this play are barely played.

She reveals herself to him as she talks to her child.  She warns her child not to be told from people that he is a loser due to coming of a vixen and not to kill needlessly.

Her little child cries for her. Yasuna tries to prevent her from leaving with a loud voice.
"I'll be in disgrace for marrying a vixen, but people can laugh all they want. I'm not letting you go without asking."

However, she disappeared, leaving behind a poem that said, "If you miss me, visit me in the Shinoda Forest of Izumi."

Kuzunoha heads for the Shinoda Forest through late autumn scenery including blue beard or Caryopteris incana(段菊 or 蘭菊, dangiku or rangiku), bush clovers, Susuki grass, shigure(a shower in late autumn) and the sound of crickets. This scene was also made into a dance.

A child says, "foxes' wedding!" after seeing her. Ancient people believed that it suddenly rained in the sunshine as the wedding procession of foxes went by. It breaks her heart to see a little child.

She dreads dogs' barks and the sound of bird clappers(naruko) in the paddies of late‐growing rices.

Yasuna and others go to the forest and meet Kuzunoha. She disappears after telling them that she saves her child. Little Seimei with superhuman prowess and Yasuna bring villains' crimes to light. Seimei is designated as onmyoji by the Imperial court.

Ashiya Doman(芦屋道満) was also a onmyoji and often appears in legends and ancient tales as the Seimei's most powerful rival. He is almost cast as a villain who is beaten in testing their skills of magic.
In this play, he is not a villain for a change and gives the child the name of Seimei.

People go to kabuki theaters to watch kabuki actors, so various performances were added to plays by actors themselves so as to make them look more attractive:
An actor as Kuzunoha makes a quick change and plays the parts of real and fake Kuzunoha in the same scene.
Real Kuzunoha and her parents run in panic on seeing fake Kuzunoha and she cries out.
Yasuna tries things out to unmask fake Kuzunoha.
With a child in her arm, fake Kuzunoha writes with her left hand or with a ink brush between her teeth.

Seven autumnal flowers according to the poems of Yamanoue no Okura(山上憶良, 660?-733?) in the Manyoshu (Collection of Ten Thousand Leaves) includes bush clover(萩,hagi), Japanese silver grass(薄,susuki), kudzu(葛), fringed pink(撫子,nadeshiko), Patrinia scabiosifolia or golden lace(女郎花,ominaeshi), thoroughwort(藤袴,fujibakama) and balloon flower(桔梗,kikyou). These flowers are blooming in August and September.
﻿
﻿
A fox hides behind a thicket of blue beard in a poem by Chinese poet Bai Juyi (白居易,772–846). So the flower came to be linked with the fox. 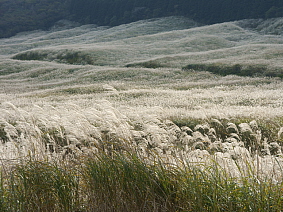 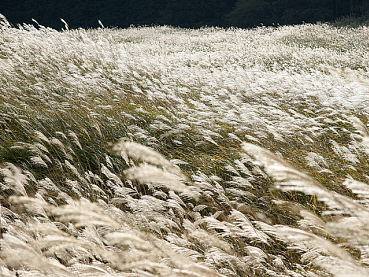