A carnation grower in one of the afflicted areas shipped tsunami-hit carnations. Although they became submerged in muddy water, they have produced masses of flowers after the water had receded.

In the afflicted areas, many people placed white carnations beside the remains of their houses, their mothers' remains in temples and their family graves.

Many people enjoy digging clams at the beach during Golden Week holidays every year, but less people went to the beaches along the Pacific Ocean in Kanto Region. In some area, a tidal range doesn't create the mudflats. 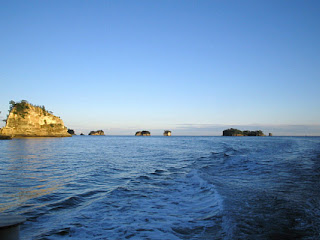 Matsushima(松島) in Miyagi Prefecture was crowded with many visitors during Golden Week holidays.

A pleasure boat restarted at the end of April. Marinepia Matsushima Aquarium repoened although some sea animals were killed by tsunami. 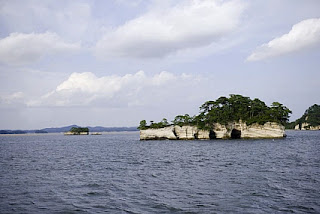 Matsushima has been long known as one of "the three most scenic spots in Japan(日本三景,nihonsankei)", along with Amanohashidate in Kyoto and Miyajima in Hiroshima.

Matsuo Basho(松尾芭蕉) visited this spot in 1689, but there is no haiku poem featuring Matsushima in his famous travelogue "Oku no Hosomichi" (The Narrow Road to the Deep North).

However, he composed the following poem featuring Matsushima.

The town of Matsushima had relatively little damage. Coastal souvenir shops and restaurants had water above floor level and four people died or are missing. It is said that about 260 small islands in the Matsushima bay served as a buffer for tsunami.

﻿
﻿
Zuigan-ji Temple(瑞巌寺) that is the family temple of Date clan is also attracting many visitors. Zuigan-ji Temple was reopened to the public on Aptil 10th.


﻿
﻿
The temple was found in 828 and the first lord of the Semdai Domain, Date Masamune(伊達政宗) built several buildings including the main building(本堂, Hondo) and kitchen(庫裡, Kuri) in 1609.


These two buildings have been designated as national treasures. No damage was done to the main building, but Kuri developed some cracks in the wall.

﻿ The approach to the temple was covered by mud.

It is said that Masamune himself planted Garyubai(臥龍梅), a variety of ume on the grounds of the temple. The ume trees reached full bloom on April 24th this year.

Visitors and residents in Matsushima took refuge in the temple after the quake and tsunami. About 300 people stayed in the building for trainee Zen monks. The monks prepared and served meals to the afflicted people. The disaster victims in the temple could sleep on futon. The monks also drew water to flush the toilet and worked to clear the rubble. Souvenir shops contributed foods to the temple.
A visitor helped the monks and residents with the cleaning in gratitude for them.
投稿者 ichinen 時刻: 12:18 AM