An annual ritual commonly known as Omizutori started on March 1st. The 1260th Omizutori is being held at Nigatsu-do hall of Nara's Todaiji temple from March 1st to the 14th.
(Refer to Omizutori for more information about Omizutori)
﻿
﻿ 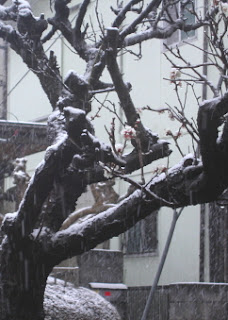 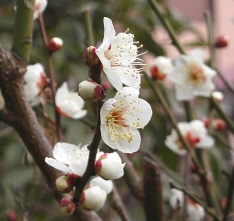 Most petals have fallen off the ume tree in my garden.
Ume blossoms are past their peak in my area, but the ume festival at Yushima Tenman-gu Shrine(湯島天満宮) also known as Yushima Tenjin(湯島天神) in Tokyo is being held from February 8th to March 8th.

The ume festival at Kairaku-en (偕楽園) in Mito City in Ibaraki Prefecture is being held from February 20th to March 31rd. Kairaku-en is a Japanese garden.

The plum-blossom(ume) festival(梅花祭) was held at Kitano Tenmangu Shrine in Kyoto City on the anniversary of Sugawara Michizane's death, February 25th. 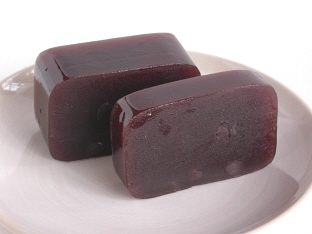 Yokan at Toraya are considered among the country's best. Toraya's yokan Yoru no Ume(夜の梅, ume in the night) has only three ingredients; adzuki, sugar and kanten.
Yoru no Ume is a bar of yokan. It shows adzuki beans when cut in cross section. This confection got its name from its resemblance to dim ume blossoms in the dark of the night.

老梅図襖 （The Old Plum）was painted by Kano Sansetsu(狩野山雪, 1590-1651) in 1647 and is now housed in the Metropolitan Museum of Art. Many painters drew a picture of old ume tree, but I've never seen such a extremely-deformed ume tree. This painting is close to contemporary art.
投稿者 ichinen 時刻: 10:42 PM