Yukata(浴衣) was originally a bathrobe called Yukatabira(湯帷子).
In summer, many young women go out in yukata to enjoy festivals or displays of fireworks. Yukata has become a popular summer fashion.
A variety of yukata including designer-label yukata arrive in stores.
Yukata that resembles kimono are sold now, but yukata is an informal wear like a T-shirt.

Yukata are cheaper and easier than kimono. Traditional kimono are usually sewn by hand, but cheap kimono are sewn on a sewing machine.

Most yukata and many kimono sold in Japan are sewn in some Asian countries because of the low labor costs. I heard from a kimono-related worker that Vietnamese seamstresses are good hands, their kimono are made with great care and kimono makers are very pleased with their well-made kimono.

We wear yukata next to the skin like a T-shirt, but we have to wear kimono-like garment under the kimono when wearing kimono. Dress and sleeve length of yukata are a little shorter than that of kimono.

Sewing kimono used to be an important accomplishment for women. My paternal grandmother was good at sewing kimono, so she made me a doll's kimono.

A roll of cloth is cut into some pieces after being marked not with a chalk but with a small clothes iron. We usually sew kimono by hand while taking care not to ruck up cloth, so unstitched pieces of cloth are less-wearing.
When I rucked cloth slightly, a sewing teacher ordered me to start over.

The pieces fit like a jigsaw puzzle, so they are sewn back together when kimono are washed. After the pieces are turned back to a roll of cloth, we wash and stretch it taut by using bamboo.
I heard from my mother that my maternal grandmother used to patch up unstitched pieces of cloth and wash them. Now we rarely bother doing that.

yukata are usually made of cotton and are unlined, so sewing yukata seems to be easier than sewing kimono. I struggled with sewing yukata because I had to get a needle through several layers of a little thick cotton cloth by hand. Especially, I had a hard time sewing the collar part. 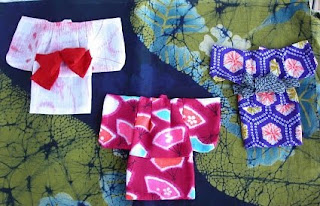 These are children's yukata. When I was a child, I used to attend the bon dance festivals held in my area in yukata.

Email ThisBlogThis!Share to TwitterShare to FacebookShare to Pinterest
ラベル: CRAFT_other