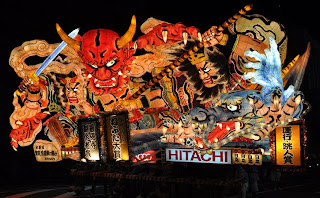 The Aomori Nebuta Festival(青森ねぶた祭) is being held in Aomori City, Aomori Prefecture from August 2nd to 7th. The festival is said to have originated as a combination of the Star and Bon Festivals.

Nebuta are 5-meter-high, intricately-shaped paper lanterns that are designed to look like characters from kabuki dramas, myths and history. About 20 nebuta floats are paraded through the city at night. Dancers in colorful unique costumes called haneto(跳ね人) prance behind nebuta floats in time with the watchword Rassera (らっせーらー). 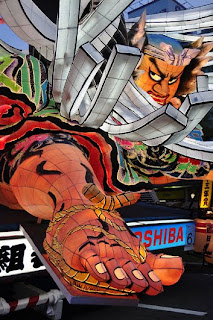 The first recorded the Aomori Nebuta Festival was in the early 18th century. Now the floats has become so large that the organizers had to raise money from sponsors such as major companies, public offices and universities. Anyone can put on the special costume and join the festival as a Haneto, but moral degeneration of participants have caused some troubles. 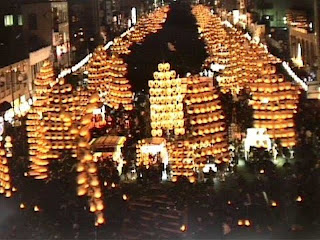 The Akita Kanto Festival(秋田竿燈まつり) is being held in Akita City, Akita Prefecture from August 3rd to 6th. The festival is said to be derived from the Star Festival. 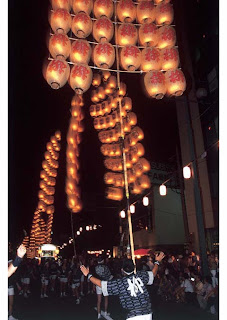 Kanto is a 10-meter-long bamboo pole with 40 lanterns(they weigh 50 kilograms).
Persons holding kanto poles balance them on their foreheads, shoulders and hips.
The shape of kanto poles represents ears of rice, that of lanterns do straw rice bags, and they're used to pray for a good harvest. 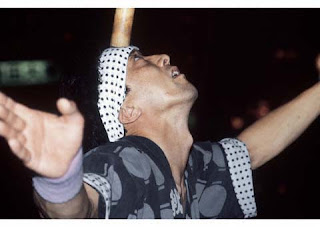