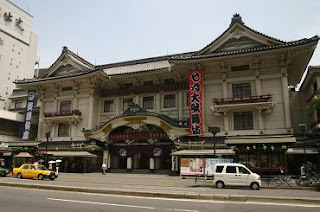 The closing ceremony of Kabuki-za (歌舞伎座), which is the theater for kabuki plays built 60 years ago at Ginza(銀座), was held today. It will be rebuild because of aging, lack of earthquake resistance and backward barrier-free environment. Every seismic damage from the earthquakes led to amendments to the Building Standard Law that stipulates seismic capacity of buildings.

It will be completed in the spring of 2013. Until then, kabuki performances will take place at The Shinbashi Enbujō (新橋演舞場). Its appearance will be left in its original state, but a high-rise building will tower behind it.

Kabuki-za is close to Tsukiji. The audience at Kabuki-za can enjoy shoppings or dinner at Ginza, which is lined with prestigious shops or restaurants. This is part of the fun of viewing a play.

Meanwhile, National Theatre of Japan, at which bunraku performances take place, is located next to … the Supreme Court of Japan! 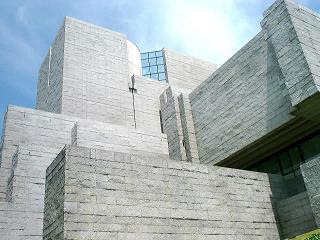 This is the Supreme Court of Japan.

It looks like a fort. U.S. Army Camp used to be there.
National Diet Library and The Diet Building are situated nearby. Nagata-cho(永田町), one of the nearest stations to the theater, is synonymous with the political world.

The home of bunraku is Osaka, and there National Bunraku Theatre stands.
投稿者 ichinen 時刻: 11:50 PM