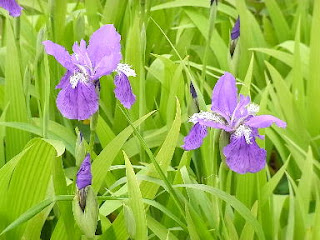 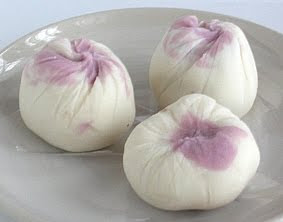 simple-shaped confection named ichihatsu. They are the same only in color.


It is said that the word "ichihatsu(一初)" means "first" and its name comes from the fact that ichihatsu blooms earlier than any other iris. The name of "the roof iris" is derived from the fact that one saw it growing on the roofs in Japan in the 1860s.

As the reason for it, an English site states that a Japanese emperor prohibited farmers from planting flowers on arable land. I searched Japanese sites about the roof iris on the net, but I was not able to confirm the fact.

Kaibara Ekken (貝原 益軒,1630-1714), who was a Japanese Neo-Confucianist philosopher and botanist, pointed out the superstition that they prevented houses from strong winds as the main reason in one of his books. At that time, irises on the roofs were common mainly throughout the Kanto region.

Roof iris has often been confused with Florentine iris. The roof iris is native to China and it seems to have reached Japan in 1563. Florentine iris (orris) is native to Southern Europe and Southeast Asia and was introduced into Japan in the middle of the 19th century.

The powdered rhizomes of Florentine iris are ingredients for high-grade perfume. I guess they were used as a face powder.