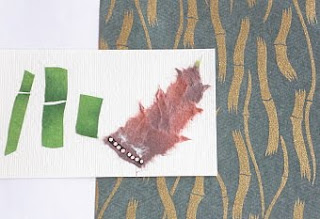 green bamboos and a bamboo shoot,
designed by Kazuko Togami

Meanwhile, many withered leaveas of bamboo are on the ground now. It's called "autumn of bamboo(竹の秋)" in Japan.

Green bamboo logs are often used as tableware at the Japanese restaurants. Freshly-cut bamboo logs are vivid, but they're nonreusable as containers. By being dried for several years after oil content is removed, bamboo logs can be used as material for bamboo ware or utensils. Bamboo is withy, light and accessible in Japan. 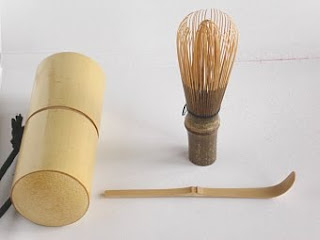 We can get bamboo leaves during young bamboo's development. They are used to wrap food such as rice balls. Because they control the level of humidity by absorbing and releasing moisture.

Bamboos spread widely underground through their rhizomes. neglected bamboos invade adjacent areas. So eating their shoots and cutting to use have restrained bamboos from spreading widely. Fewer people utilize bamboos for various uses, so neglected bamboo groves has become a serious problem.

It was hot like summer the day before, but it's been very cold like midwinter yesterday and today. We've got to worry about what to wear every morning. Vegetables, expecially leaf ones have been very expensive.
投稿者 ichinen 時刻: 10:49 PM