He might (1)go to the celestial world(not eternal paradise),
(2)go to hell,
(3)reincarnate as a human,
(4)reincarnate as a creature other than humans,
(5)be a Gaki (hungry ghost),
(6)be an asura in the everlasting battlefield
The dead reincarnate into the above six worlds many times.
Only those who attained moksha(enlightenment) can get out of this infinite loop.

We need to prepare a japanned spirit tablet with kaimyo by the day of Shijukunichi memorial service.

SotSotoba(tall wooden tablet set up for the repose of the deceased) was put up by our family grave. Sotoba comes from the Sanskrit word "stupa." Bonji, a passage from sutras, kaimyo, date of death, chief mourner's name, placed date are written on the tablet. Bonji(梵字, the Siddham script) is a descendent of the Brahmi script and is used to write Sanskrit.

Her urn was placed in charnel room under the tombstone. The priest read a sutra in front of the grave. We offered some flowers, burned incense and joined our hands in prayer. 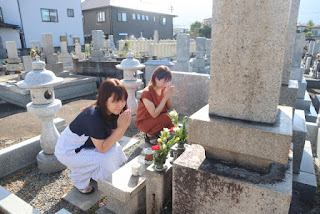 Usually deceased person's relatives go to their family temple, and they have a meal after Shijukunichi memorial service.

Shotly after Shijukunichi memorial service, a chief mourner sends a gift called koden-gaeshi in return for a funeral offering. Generally, the monetary value of the koden-gaeshi often ranges from 30% to 50% of that of the koden. A greeting card enclosed in the koden-gaeshi represents thanks for attending the funeral and announces the end of the mourning period.

My family temple belongs to Shingon Buddhism, but people of all creeds can own their grave on the burial ground of the temple. The burial ground includes Shinto-style graves called "Okutsuki(奥津城)", graves of Korean nationals living in Japan. Shintoism adherents are mostly not allowed to build their graves on the grounds of  Shinto shrines because Shinto regards death and blood as Kegare(foulness). The population of Korean nationals living in Japan  is about 479,000. Perhaps surprisingly, many people build their graves before their death in Japan.

A surname, "senzo-daidai-no-haka(先祖代々の墓, ancestral tomb)" or a passage from sutras are inscribed on a Japanese-style tombstone. A family crest is also etched.

As of December 31,2019, Shintoism adherents account for 48.6%, Buddhists account for about 46.3%, Christians account for 1.0%, and other religions make up 4.0% of Japan's population, according to a statistical study on religion conducted by the Agency for Cultural Affairs.

At the first bon festival following Shijukunichi memorial service, bereaved families suspend a white paper lantern at their entrance. They prepare the Bon festival, invite relatives and familiar persons, have a Buddhist priest read a sutra at their home. They make a monetary offering(Fuse) to the priest and serve a meal to the visitors. The white paper lantern is used only onetime.

My family temple's priest doesn't visit the houses of the temple's supporters. The temple performs Segaki(施餓鬼), which is a ritual to stop the suffering of the such restless ghosts/monsters as Gaki on August 1st. The deceased's families after more than 49 days after the deceased's death are asked to attend Segaki. The temple's supporters need to pay grave maintenance fee and the donation for segaki every year. At the first bon festival following Shijukunichi memorial service, they need to pay the higher donation for segaki than usual. Due to the COVID-19 pandemic, Segaki was performed behind closed doors for the second straight year. The priest posted video footage of him reading a sutra on YouTube.

The period of mourning after the death of a parent lasts one year. So our family members won't observe the New Year's festival and won't send New Year's cards.

On the first anniversary of one's death, The deceased's family will invite relatives and familiar persons. A Buddhist priest will read a sutra, they will an offering of incense at the temple's hall. Then they will visit the family grave, offer some flowers, and burn incense at the grave and serve a meal to the visitors.

On the first anniversary of my mother's death, only my family members will visit my family grave.

On the first and second anniversary of death, mourners wear a mourning cloth.  Woman mourners are allowed to wear pearl accessories. Very few people wear a mourning kimono. On the subsequent anniversaries, they wear sober clothing.

I mention a Shinto funeral briefly here. I have never been to a Shinto funeral, but a relative of mine has been to it before. Shintoism doesn't see death as sad. Humans return their lives to deities after they died. Shinto funeral called Shinsosai(神葬祭) is a ritual for the dead to become a guardian deity of the dead's home.
The Three Imperial Regalia consist of the sword Kusanagi (草薙劍), the mirror Yata no Kagami (八咫鏡), and the jewel Yasakani no Magatama (八尺瓊勾玉). Magatama are curved, comma-shaped beads. Their replicas are decorated.
The mirror's replica is placed on the top tier of the altar, and the deceased's photo is on its middle tier. Rice, salt, sake(酒), water, kagami-mochi(round rice-cake), sea fish, eggs, vegetables, fruits, confections, dry food are placed on its bottom tier. A pair of Cleyera japonica (sakaki) with five color banners stand on either side of the altar. The sword's replica in cloth case is hung up on the left sakaki. The jewel's replica is on the right sakaki.
the process of Shinto funeral
The bereaved close the double door of their household altar and put a piece of white paper on the door.
day1
Tsuya-sai(通夜祭)
Before a ceremony, all attendants need to purify themselves by washing their hands and rinsing their mouth. A Shinto priest talks about the deceased's background, offers tributes to him/her, wishes him/her to become a guardian deity of his/her home, and recites religious speeches. Sometimes gagaku musicians play music. Attendants offer tamagushi(a branch of a sacred tree) and pray.
Senrei-sai(遷霊祭)
Tsuya-sai is followed by Senrei-sai. The priest holds a ritual to transfer deceased person's soul from his/her body to a natural tablet called reiji(霊璽).
day2
Sojo-sai(葬場祭)
Sojo-sai is held in much the same manner as Tsuya-sai. The priest purifies attendants. Shrine staffs put offerings on the altar. A memorial address is given.

Kaso-sai(火葬祭)
Kaso-sai is a ritual before cremation. The priest offers Shinto prayers. Attendants offer tamagushi and pray. Then the cremation is done.
Maiso-sai(埋葬祭)
Maiso-sai is a ritual for burial. The bereaved used to take the dead's ashes from a crematorium to their family grave and bury it there. In recent years, they carry the ashes home and bury it at a ritual called Gojunichi-sai(五十日祭) commemorating the 50th day after the death.
Gojunichi-sai is a ritual to transfer deceased person's soul from a temporary altar to a household altar(祖霊舎, soreisha) as a guardian deity of deceased person's home. Offerings are put on the altar. The priest show gratitude for deities and express a belief in deities. Attendants offer tamagushi and pray.
Offered foods on the altar are set down on the table, and attendants eat them. It's called Naorai(直会).
The bereaved tear a piece of white paper off the double door of their household altar.

Email ThisBlogThis!Share to TwitterShare to FacebookShare to Pinterest
ラベル: ceremonies