My mother passed away from lung cancer in March. I have calmed down at the moment. I was by her bedside when she departed this life at the hospital. A funeral director took her from the hospital to my home, though bodies are often taken directly to the funeral home.

My family's religion is Shingon Buddhism, a school of Japanese Buddhism. She was laid with dry ice on her futon with her head pointed northward. A white cloth covered her face. An incense stick was lighted on a low table by the futon. The next day, my family members made funeral arrangement with the  funeral director. We chose a traditional Buddhist-style altar, a cinerary urn with cherry blossoms pattern, a paisley-upholstered coffin, a  shroud(dianthus-patterned  kimono made of smooth satin), her photo and a green frame for it, funeral flower stands, and a hearse. Kimono for the dead is sewn by slightly different way.

Ordinarily Buddhists hold a wake called tsuya(通夜) and funeral service. Tsuya is held around 7 p.m. The next day funeral service generally starts at 10 or 11 a.m. Working persons can attend tsuya after work. Most mourners choose either tsuya or funeral service.

In Japan, tsuya is generally held irrespective of creed. Most funeral halls and crematories are closed on the day of tomobiki, which literally means "pulling friends" and is a good day for business and lawsuits. However the word is associated with taking the deceased's friends with the deceased.

I reserved my family temple's priest to read a sutra at a local funeral home and requested him to give my mother a posthumous Buddhist name called kaimyo(戒名.)

Two days after her death, she was moved from my home to the funeral home. Two encoffiners performed a ritual called yukan(湯灌) to encoffin bodies at the funeral home. In front of our eyes, they carefully spilled warm water on her arms and legs, and shampooed her hair. I was so glad to see her hair shampooed because she had taken bed bath after hospitalization. They washed her whole body after we exited the room. Her body in dianthus-patterned white kimono was laid in a upholstered coffin. It is not uncommon for people to sit with and talk to the body almost as if it were still alive. I often talked to her.

Makurameshi is a heaped bowl of cooked rice with upright chopsticks in it. It means a final meal of the dead in this world. The bowl and the chopsticks belong to my mother.  Each of us has our own bowl for rice and chopsticks. Makuradango comes from the Buddhist episode that a bodhisattva offered rice dumpling to Buddha after his death. They are offered so that the dead can eat them or give them to the hungry departed on the way to the next world. Makurameshi and Makuradango are put in a coffin at the end.

Customs vary by Buddhist sect and region. So we imitate the people ahead of us at the funeral home.

In Japan we offer condolence money for a funeral(香典, koden) to the family of the deceased when visiting them for a wake or a funeral. Koden is sealed in special envelopes tied up with black and white string.

There are some envelopes for koden. 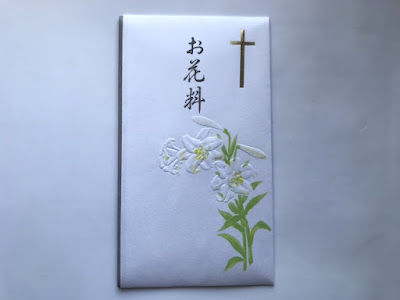 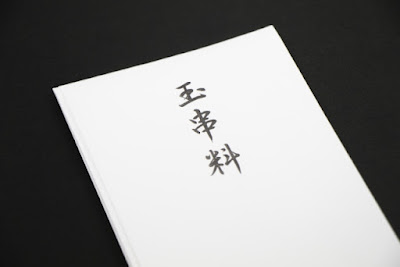 ●description on envelope for Buddhists
gobutsuzen(御仏前) (money for offering to the deceased)
●description on  envelope for  people of all creed
goreizen(御霊前) (money for offering to the deceased)
Envelope with gobutsuzen are not suitable for a wake and funeral service. It is said that the deceased has yet to attain Buddhahood until 49th day memorial service. However the adherents of the True Pure Land Buddhism use the envelopes with gobutsuzen for a wake and funeral service because the deceased is said to become a Buddha immediately after death. When the deceased's religion is not known, funeral attendants can use an envelope with goreizen.
Funeral attendants wrap a koden-envelope with fukusa(袱紗).
Fukusa is a piece of cloth. Recently, a cloth case for koden is commonly used.
They give it to the receptionist and sign the book of condolences at a funeral home.
Since only my family members attended my mother's funeral, we received koden in the mail.

At a wake, a Buddhist priest reads a sutra, mourners pick up crumbled incense (makko) and sprinkle it on a small fraction of charcoal on ashes in the incense burner(koro) to burn. 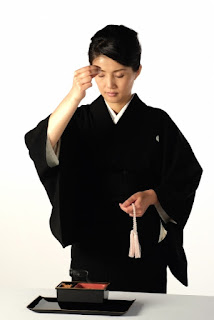 In some schools of Buddhism, a mourner holds it up in front of forehead after picking incense 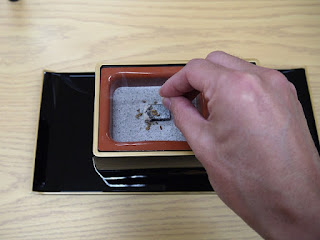 The chief mourner(the deceased's family member) expresses their appreciation for coming to the funeral.

After the wake, a light meal such as sushi accompanied with beer and sake is served to mourners. They share some memories of the deceased. The closest relatives may stay and keep vigil with the deceased overnight.

The chief mourner gives attendants a greeting card to express thanks for attending the funeral, salt and an article such as green tea, Nori(dried edible seaweed), handkerchief or hand towel. Mourners sprinkle salt on themselves for purification in front of their doors. Recently salt tends not to be given.

Most bereaved families recently conduct small-scale funeral service. The COVID-19 pandemic has encouraged this trend. My relatives are elderly or live far away. Only my family members attended my mum's funeral. We didn't hold a wake.

My mother's funeral service started at 8:30 a.m. on the 6th day after her death. I live in Yokohama city that has 928,450 people over 65 as of March 31, 2021. More people die in the winter than the summer every year. The city has only four public crematoriums. Furthermore, only Covid-19 victims were cremated after 3 p.m. So these crematoriums were booked solid for days.

We made a monetary offering called Fuse(布施) to the Buddhist priest in return for receiving kaimyo and reading sutra before the funeral. We also paid him for transport(御車代, okurumadai).

At the funeral, the priest read a sutra, we sprinkled crumbled incense in the incense burner and put flowers inside the coffin. I put old letters and a deck of paper cards inside the coffin beforehand. She loved to play contract bridge. 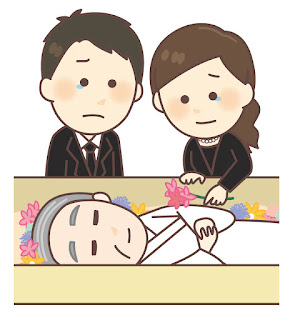 Then we went to a crematorium with her photo in frame, the tablet. 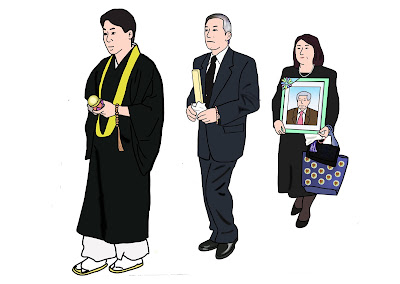 In Japan, more than 99% of the dead are cremated. When the bereaved choose burial, they will go to a great deal of trouble to get a grave for burial. There is little space for burial in Japan.

As a ritual called Kotsuage(骨上げ), paired relatives pick a piece of bone from the ashes with chopsticks and place them in an urn. We transferred some pieces of her bones into her urn. A crematorium technician put other pieces of them into it.

After going home, we placed the photo, the tablet, the urn, an incense holder, a candle holder, a singing bowl with striker, flowers, offerings on a post-funeral altar.

We burn an incense stick, ring the bowl and join our hands in prayer daily until the 49th day after her passing. We still do them every morning.

It seems that they are two women, a young man and a child. He looks like a teenage boy due to his hairstyle called Wakasyu-mage. I guess that his father died and that he picks bones with his mother, his grandmother, his little sister.
投稿者 ichinen 時刻: 9:26 PM

Email ThisBlogThis!Share to TwitterShare to FacebookShare to Pinterest
ラベル: ceremonies