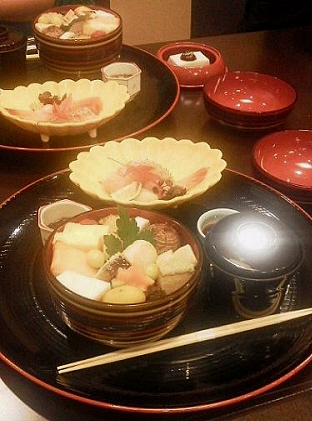 I had lunch at a Japanese restaurant that a former classmate worked for last week.

Three-tiered boxes, a soup bowl, vinegared food in small hexagonal bowl and sashimi dish are placed on top of the tray.
Goma-dofu(back right), a dish of assortment and rice are set in three-tiered boxes. 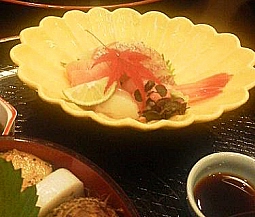 Sashimi(刺身:sliced raw fish) on a yellow dish shaped chrysanthemum flower. A maple leaf is decorated on them. 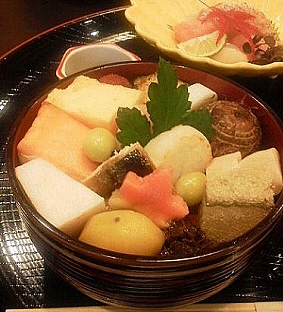 A dish of assortment include a chestnut, kinukatsugi(taro with the skin), maple-shaped namafu(生麩, steamd pieces of wheat gluten), ginkgo nuts and others. Chrysanthemum leaf is used as a decoration. 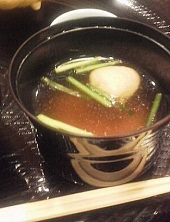 
She participated in short-term training at a traditional Japanese confectionary shop in Kyoto.
﻿
﻿
These confections(Kyo Shirakawa Shigure and Aki no Yamazuto) are sold at the store named Yuzuki(游月) in Kyoto.
Two thin branches in this photo are used as chopsticks.

It means a souvenir from mountains in autumn. This confecition is a variation of ukishima(浮島) which is a steamed moist sponge cake that contains bean paste, sugar, eggs and flour. This confecition includes sweet potato named Naruto Kintoki(鳴門金時), chestnut with astringent skin and steamed yokan. 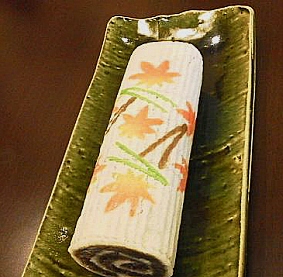 Sweet adzuki beans rolled with the dough of Murasame(村雨) which is made by sifting a mixture of beans paste and rice powder, drying and steaming it. Although you can buy this confection year-round, the design on its surface varies with the seasons. This confection has the design of autumn leaves now.

Kyo Shirakawa refers to the Shirakawa River in Kyoto. Both Shigure(時雨) and Murasame(村雨) mean the drizzling rain in late autumn and early winter. 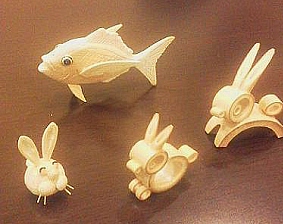 A fish and three rabbits are made only of bamboo. They are displayed at the restaurant. The maker of these does bamboo work for enjoyment.
投稿者 ichinen 時刻: 9:54 PM