In Japan, six year-old children used to start lessons of traditional accomplishments such as Japanese dance, Japanese flower arrangement and playing traditional Japanese instruments on the 6th day of the 6th month in the lunar calendar. Even now some people follow the custom on June 6th.
Perhaps many people associate the Number of the Beast with 666, though. 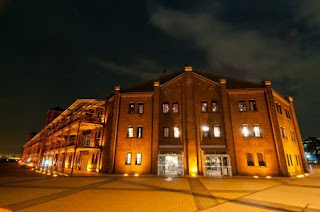 Red Brick Warehouses were built in 1911 and 1913. Those buildings were reinforced with iron. Building No.2 was not damaged, but 30% of Building No.1 was destroyed by the 1923 Great Kanto Earthquake. Both of them have shops, restaurants and event spaces now. 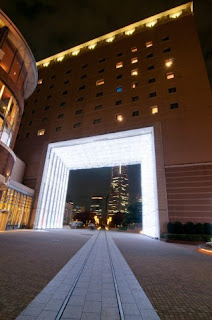 ﻿﻿﻿﻿﻿Kishamichi Promenade(汽車道)  takes advantage of the dead track of a freight railroad which linked Sakuragi-cho Station and Shinko area. The promenade passes under Cross Gate which is a commercial complex. 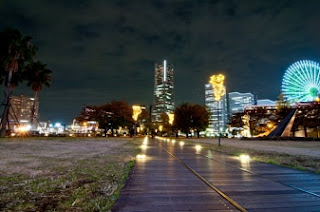 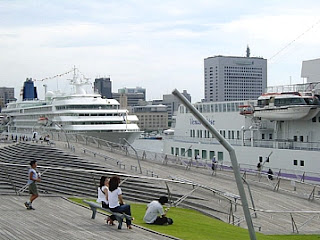 Yokohama International Passenger Terminal "Osanbashi Pier" was reopened in 2002. It's a fully-boarded building. 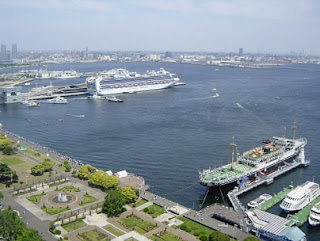 Yamashita Park in Yokohama was made in 1930 out of reclaimed land made from the rubble caused by the Great Kanto Earthquake in 1923. 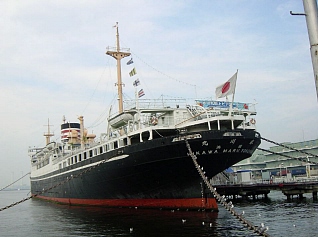 A ship named Hikawa-maru has been moored at Yamashita Park.
She entered service as a cruise ship in 1930 and carried passengers including Charles Chaplin between Yokohama and Seattle. During World War II, she was used as a hospital ship. Most vessels in Japan went down, but she survived.
After the war, she was used as a repatriation ship or carried cargo.  In 1953, she returned to carrying passengers between Yokohama and Seattle. The passengers included Japanese recipients of the Fulbright Program. 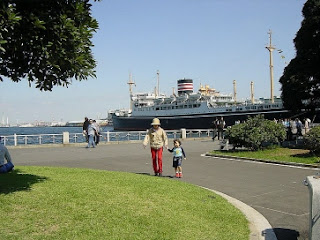 After retiring in 1960, it was moored at the park and opened to the public. The Hikawa Maru museum was closed because of decreasing its visitors in 2006, but the ship was reopened to the public in 2008. The ship is now a Yokohama Cultural Asset.
I went to Yamashita Park with a friend living in Tokyo a long time ago. The ship was not popular anymore, but she had a grand day in the ship.

Many buildings built between the 1900's and the 1930's remain in Kannai area. However, most of old buildings were destroyed by the 1923 Great Kanto Earthquake.
I've been to Shanghai. I thought the Shanghai settlement was similar to Kannai area.

Here are a part of those buildings. I prefer Kannai area rather than Minatomirai area. 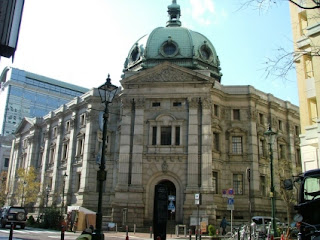 The Kanagawa Prefectural Museum of Cultural History(神奈川県立歴史博物館) was built as a bank in 1904. 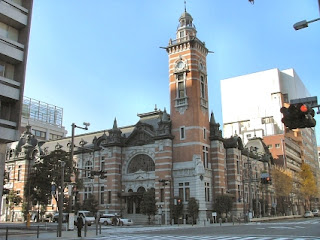 The Yokohama City Port-opening Memorial Hall(横浜市開港記念会館, the Jack) was built using funds donated by private citizens as its 50th anniversary celebration in 1917. 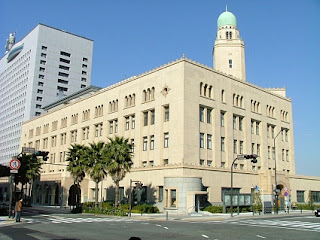 Yokohama Custom House(横浜税関, the Queen) was built in 1934.
On the site of the custom house, remains were found buried in the debris of the 1923 earthquake several years ago. 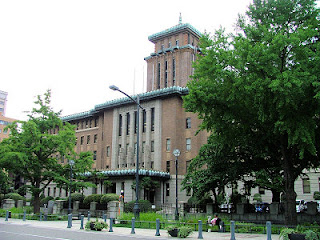 The Kanagawa Prefectural Government(神奈川県庁本庁舎, the King) was built in 1928.  Three new government buildings are also being used because the old building became too crowded. 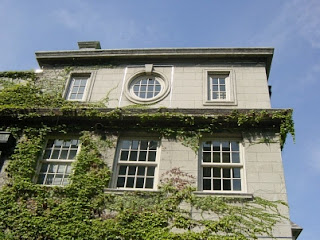 The Yokohama Archives of History(横浜開港資料館) was used as British Consulate General from 1931 to 1972. It reopened in 1981.

A tree(Machilus thunbergii) called Tamakusu is standing in the courtyard of the archives. It has been in Yokohama since before Yokohama opened its ports in 1859.  The tree was ravaged by a fire in 1866 but sent out tillers in the yard of British Consulate General. 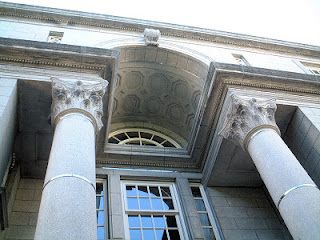 Tamakusu was destroyed by the 1923 quake again. The tree was in full leaf after being replanted 10 meters away from an old tree position. You can see the tree there even now.

A seedling of Tamakusu was presented to Rikuzentakata City in Iwate Prefecture. Takatamatsubara(高田松原) was a scenic spot where pine trees and sands stretched over 2 km along the sea. The pine trees were swept up by the tsunami, and one of them was left alone. 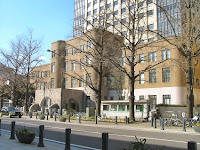 The Yokohama District Court was built in 1918.
My old high school built after the 1923 quake was similar to this building. Unfortunately, the school was rebuilt.

The former Yokohama Branch of Fuji Bank was built in 1929. 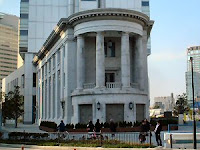 Yokohama Island Tower was built as a bank in 1929. 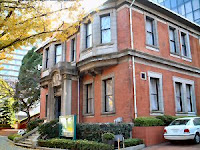 English House No.7(now the Toda Peace Memorial Hall) was built as the office of an English trading company in 1922. 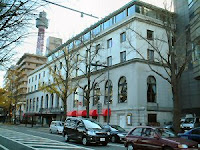 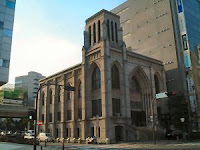 Yokohama Shiloh Church was build in 1926. 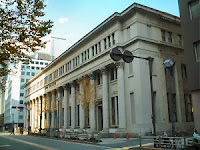 The NYK Maritime Museum (the former Nippon Yusen  building) was built in 1936. 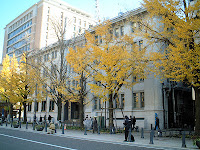 The Yokohama branch of Mitsui, a major trading company, has two buildings. No.1 building built in 1911 was the first  reinforced concrete building in Japan. No.2 building was added to theNo.1 building  in 1927. 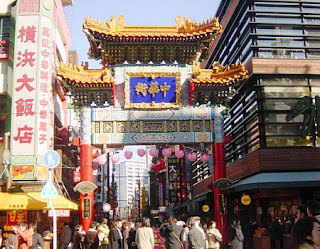 Yokohama Chinatown is near Yamashita Park. 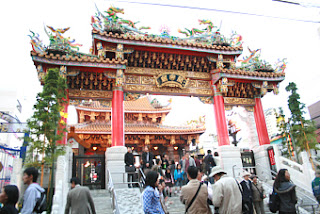 
After the opening of the port, the foreign settlements were built in Yokohama. Foreigner areas stretched from Kannai to the Bluff area that is the high area south of downtown Yokohama.
Some old houses and the Yokohama Foreign General Cemetery remain in Yamate and Motomachi areas. 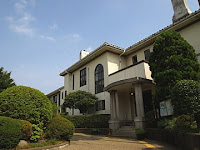 British House Yokohama was built as the official residence of the British Consulate General in 1937. 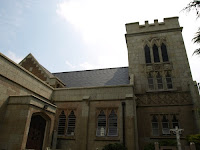 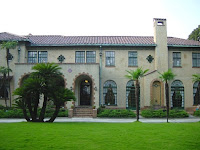 Berrick Hall was built as the home of English merchant B.R.Berrick in 1930. 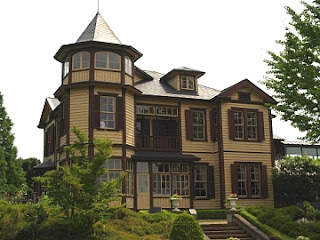 The Home of a Diplomat was built as a Japanese diplomat's house in Tokyo in 1910. It is a two-story wooden house designed by James McDonald Gardiner. The house was relocated to Yokohama and was opened to the public in 1997. 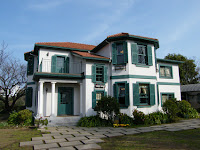 Bluff No.18 was built as a house for foreigners in Yamate after the 1923 quake. 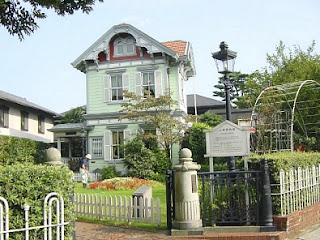 Yamate Archives Museum was built as Nakazawa's house by Yokohama's carpenters in Honmoku(Yokohama) in 1909. It was relocated to Yamate in 1977 and is the only Western-style wooden house from the Meiji era that left in Yokohama.

Ehrismann Residence was built as the home of Swiss merchant Fritz Ehrismann in Yamate in 1926. It was relocated to Motomachi Park in 1990. 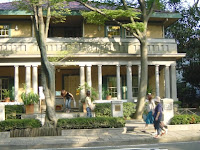 Bluff No.234 was built as an apartment house for foreigners in 1927.

The foundations of the McGowan House was preserved and opened to the public as The Bluff 80 Memorial Terrace at Motomachi Park. Although French merchant Macgowan and his wife lived in a three-story steel-reinforced brickhouse, the house collapsed in the 1923 earthquake.

I like the Yokohama Doll Museum that has about 3500 dolls from Japan and the world.
I've seen antique Hina dolls and their miniature furniture there. The furniture was exquisite miniature reproduction of marriage furniture. Probably you can see them around the Doll Festival.

Photo by Railstation.net and others