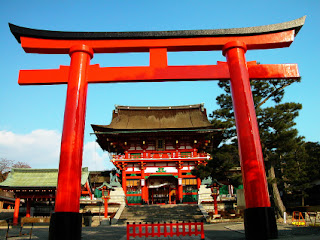 Rituals for agricultural fertility are practiced at Fushimi Inari Taisha(伏見稲荷大社 :the head shrine of Inari in Fushimi) and its sub-shrines throughout Japan on the first horse's day of February (初午, Hatsuuma). The day corresponds to February 8th this year.

A torii is a symbolic Shinto shrine gate which marks the entrance to a sacred area. It literally means "a perch for birds," but its exact origin is unclear. 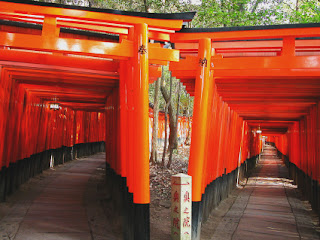 This is called "1,000 torii(千本鳥居, senbon-torii)," but in reality 10,000 torii line up.
Inari(稲荷) is the god grain, agriculture, trade and manufacture.  Followers of Inari have a custom of donating a wooden torii to Inari. It is said that the custom started from the Edo Period. As a result, 10,000 torii has lined up. 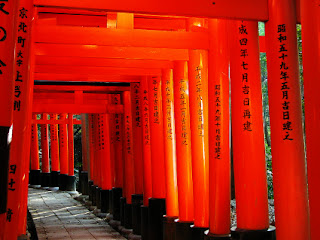 The date of dedication using Japanese traditional era name is written on torii. A visitor estimates that a wooden torii have a useful life-span of 20 years.  It seems that many followers dedicate torii every year. 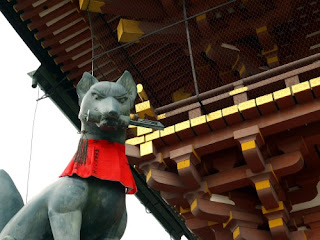 At Inari shrines, foxes are regarded as the messengers of the god. They hold a key, a gem, ears of rice and a scroll (Buddhist canon) in their mouths. 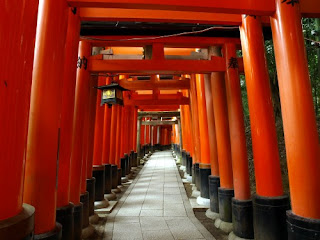