It's snowing in Yokohama. In recent years, we has had light snowfall here. 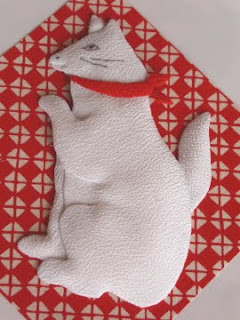 It is said that the god of grain, agriculture, trade and manufacture came down to Fushimi Inari Taisha (伏見稲荷大社 :the head shrine of Inari in Fushimi) in Kyoto on the first horse's day(初午: hatsu-uma) of February in 711 in the lunar calender. Nowadays the Inari shrine rituals are practiced at Fushimi Inari Taisha and its sub-shrines throughout Japan on that day in the solar calender.

Foxes are regarded as the messengers of the god. You can see a pair of stone-carved foxes like this in Inari shrines. Some people offer foxes' favorite, deep-fried bean curd, to the god. So udon (a type of thick wheat-flour noodle) topped with deep-fried bean curd is called "Kitsune(Fox) udon".