the first day of spring

Today is Rissyun(立春:the first day of spring).
This is the right song for today.

It's springtime according to the calendar.
Having said that, I feel the cutting cold wind.
A bush warbler of the valley thought of singing.
But it didin't so. Because it's too early to sing a song now. 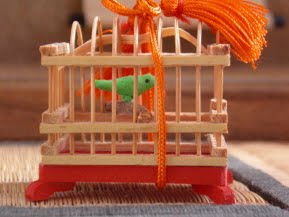 Japanese bush warblers begin to sing in the middle of February. That time of year mostly coincides with New Year's Holidays according to the lunar calendar, so that ancient people prized their first song of the year called Hatsune(初音) as a sign of early spring.

あらたまの年たちかへる朝より待たるるものは鶯の声（素性法師）
"The start of a new year gives me a longing for the first song of bush warbler", written by Sosei.

The first thing I come to mind when thinking of Hatsune is "The Tale of Genji". Female novelist Murasaki Shikibu wrote "The Tale of Genji" in 54 chapters about 1,000years ago. She portrayed the life of the hero Hikaru Genji in this story. "Hatsune(初音)" is chapter 23. Its name comes from the following waka poem.

The poet was not abel to meet her daughter even on New Years Day. Her daughter lived on the paternal side. This poem represents a mother's grief.

Marriage furniture associated with hatsune have been handed down in the feudal lords. 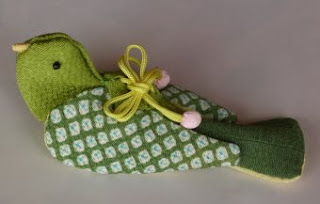 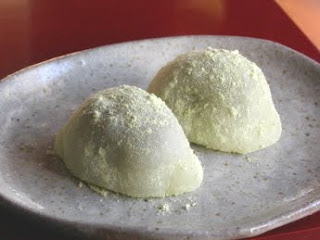 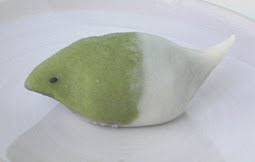 confection in the shape of bush warbler 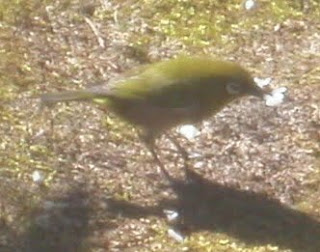 this is the Japanese White-eye which is the same as the Japanese bush warbler in color. Bush warblers are very cautious, so I have never seen any one in my garden.
Historically, it was kept as a cage bird to enjoy its beautiful birdsong. Even now, only one white-eye per household is allowed to keep. 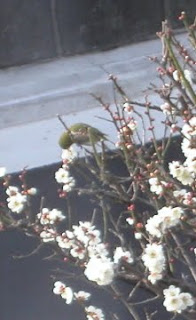 The Japanese White-eye feeding on nectar.

Now, wild birds are having very hard times with food shortage. I can see only tree sparrows, pigeons and crows in my garden during the seansons except winter. However, in winter, another kinds of wild birds such as mejiro(目白:Japanese White-eye), shijukara(四十雀:Great Tit), hiyodori(鵯:The Brown-eared Bulbul), mukudori(椋鳥:The White-cheeked Starling) often come down to my garden. During the New Year's season, nanten(南天:Nandina or heavenly bamboo) and manryo(万両:Ardisia crenata or coralberry) trees bore full fruit. Now, Brown-eared Bulbuls are likely to eat up the berries on that plants.
投稿者 ichinen 時刻: 11:21 PM