Dogs visited shrines on behalf of their owners(1)

2018 is the Year of the Dog according to the Chinese zodiac. So I raise some topics about dog statues and sculptures.

There is a dog statue at Daruma-ji(達磨寺) Temple in  Oji-cho, Kitakatsuragi District, Nara Prefecture. His name is Yukimaru(雪丸.) He is said to have been the dog of Prince Shotoku(574-622) who was regent and a politician of the Asuka period in Japan. Legend has it that he was able to talk human language and chant a Buddhist sutra, and he left a will to bury his body in the temple. The statue is considered established in the Edo Period. The statue of Yukimaru is  mentioned in Yamato meisho zue, an illustrated guide describing famous places in Nara Prefecture, published in 1791. The official character of Oji-cho(Oji Town) is also called Yukimaru. Saigo Takamori's  bronze statue in hunting attire with his dog based on a Satsuma dog stands in Ueno Park, Tokyo. He went hunting a lot, so he had many hunting dogs including the female Satusma dog Tsun.  One of his dogs named Tora accompanied him on a visit to Gion, a geisha district in Kyoto. He brought his dogs to a war zone. With the situation deteriorating, he unleashed his dogs. 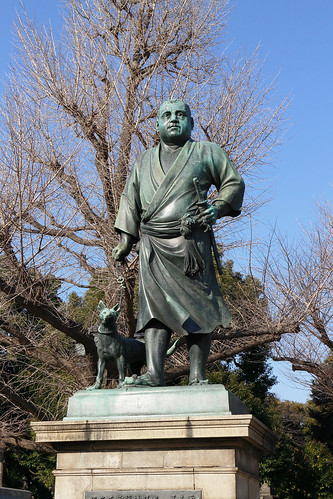 
Saigo Takamori(1828-1877) was a Japanese samurai from Satsuma(former Kagoshima), a military commander, a politician. He was dragged unwillingly into the Satsuma Rebellion and committed seppuku as a leader of the rebel group in 1877. His honor was restored through efforts of many people including the Emperor Meiji in 1889.

Myoe (明恵) (1173–1232), a Japanese Buddhist monk,  kept a wooden puppy dog with him all the time until his death. He revived an old temple and established the Toganowosan Kosanji Temple in Kyoto. The wooden figure has been designated as a nationally important cultural property.

Kosanji Temple is home to several works of art, including Choju Giga (Scrolls of Frolicking Animals), the puppy figure. However, the scrolls are now entrusted to the Kyoto National Museum and Tokyo National Museum.

Maruyama Okyo (円山 応挙, 1733-1795) was a popular painter and left a lot of puppy paintings. Okyo-kan is located in the Tokyo National Museum's garden.  The building was built in 1742 as a shoin (study/drawing room) at the Myogen'in Buddhist temple in Aichi prefecture and was moved to the current location in 1933.  Myogen'in was also known as the oldest eye clinic in Japan. Okyo engaged in the ink paintings on the interior walls and sliding doors because he was a patient of the clinic. Puppies and Convolvulus were painted on a Japanese-cedar sliding door of the building.

Motoinu(ex-dog) is a program of Rakugo(comic story telling).  Rakugo performers play several characters and narrate in one-person shows. They can only use a Japanese fan and a washcloth as a prop, kneeling on a cushion the whole time. They use a Japanese fan to resemble a kiseru (Japanese smoking pipe), a letter, a sword, chopsticks, an ink brush, a fish pole, an umbrella, a sake server, and so on. Or they pretend that a washcloth is a wallet, paper, a book, a cigarette pouch, and so on.

There was a popular belief that white dogs could be reincarnated as human beings in the next life by praying fervently to the gods.  In Buddhism any human could be reborn as animal, and any animal could be reborn as a human.  In this story a white dog named Shiro(shiro means white) performs a ohyakudo-mairi(hadashi-mairi in another version) at a shrine to pray for be reincarnated as a human. He visits and prays at a shrine for 21 days. On the morning of the last day, he turns into a naked human. An ex-dog man draws a lot of laughter.


A version of Motoinu is set at Kuramae Jinja Shrine(former Kuramae Hachiman) , Taito Ward, Tokyo. A statue based on this story stands at the shrine. 
Emperor Shomu(聖武天皇, 701-756) established provincial monasteries and nunneries(kokubun-ji and kokubun-niji) in each province of Japan. Todai-ji was positioned as the head of all these kokubun-ji. Empress Komyo(光明皇后, 701–760) established Hokke-ji Temple(法華寺) as the head of all the provincial nunneries in 745. She set up public facilities such as a home for orphans and the neediest and a free clinic to care for the sick and to treat patients with medication.
The nuns of Hokke-ji have made the same dog-shaped talisman called Omamori-inu as one of the empress' own making. The charm is available only at the temple. Pre-order is necessary.


8. Dogs went on a pilgrimage to Ise Shrine

It is believed that deities hate 'Kegare' (impurity).  In general, shrine grounds are closed to dogs because shinto shrines are unwilling to be contaminated by dog excreta. However, some dogs visited shinto shrines on behalf of their owners in the Edo Period. Kunio Nishina recounted dogs' pilgrimage to the Ise Shrine in detail in his book(Kunio Nishina, INU No Isemairi(Dogs' Pilgrimage to Ise Shrine), Tokyo, Heibonsha Shinsho, 2013.) Most dogs were communally owned in the Edo Period. They were free-roaming in their villages. Dog owners or villagers put a wooden plate with their dog's hometown written on it and traveling expenses around the dog's neck. The dog was called Okage-inu. They entrusted their dogs to tourists. The dogs were handed over from a tourist to another like a baton in a relay race. Many people supported Okage-inu out of good intentions by traveling with the dogs, giving them board and lodging. Some dogs were sent alone to Ise.


In the first half of the 19th century the head of the Ichihara family in Sukagawa, Fukushima Prefecture visited the Ise Shrine every year, but he got sick in a given year. His dog Shiro, a white Akita, was very clever. So he decided to send Shiro to the shrine on his behalf. He put a cloth neck bag including traveling expenses, pieces of paper with the directions to the Ise Shrine and a message to supporters around Shiro's neck. The family saw Shiro off at the end of the Sukagawa post station. After two months, Shiro came back from the shrine. The neck bag included ofuda(paper talisman) of the shrine, a receipt of votive offering of money, feed bill, and money left. Shiro died three years after his journey. He was buried in Junen-ji Temple, the temple of the Ichihara family.  The family installed the grave with a stone carving of Shiro near their family graves. Even now, the family members offer incense sticks and put flowers on their family and Shiro's graves.

"Okage-inu" was much talked about at the time. Most okage-inu were white dogs. Supporters felt proud of participating in dogs' pilgrimage like an Olympic torch relay runner. Some people got the wrong idea about some dogs. According to the book, a dog shuttled between Kuroishi in Aomori and Ise Shrine(the distance between two points is about 1200 kilometers) because someone mistook a dog to be a okage-inu. That's an unwelcome favor, but mistaken dogs were well-cared for by many people.

The book says a pig and cattle also went on a pilgrimage to the shrine.(There were oxen to plow with. Pigs were raised to wine and dine the members of the Korean Emissary in Hiroshima and Okayama. They were also raised in Nagasaki. Hollanders and Chinese were approved trade in Nagasaki and Dejima.)

The last recorded okage-inu was an antique shop owner's dog which went from Nihonbashi(in Tokyo) to the shrine in 1874.

Commoners were prohibited from moving freely across Japan in the Edo Period, but only going in pilgrimage was allowed. They went on a sightseeing trip to Ise and other sacred places such as Todai-ji(東大寺) in Nara Prefecture, Kiyomizu-dera(清水寺) in Kyoto, Kotohiragu(金刀比羅宮) in Kagawa Prefecture, Zenkou-ji(善光寺) in Nagano Prefecture and Kumano-sanzan(熊野三山) in Wakayama Prefecture under color of religious pilgrimage. In the 1830s, 4.8 million people, which accounted for a sixth part of the total population in Japan, made pilgrimages to Ise Jingu.

Some dogs also took a pilgrimage to Kotohiragu. They were called Konpira-inu. Even now, the shrine is dog friendly.  Please mind your manners when you visit Kotohiragu with your dog. 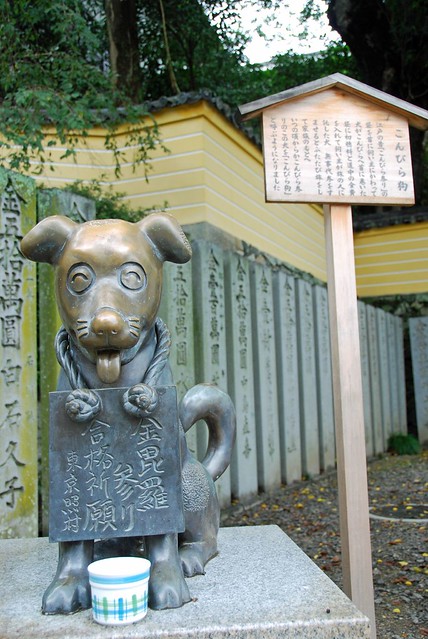 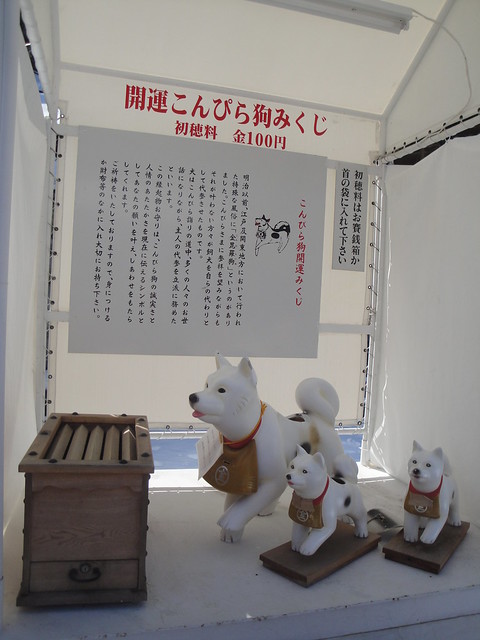 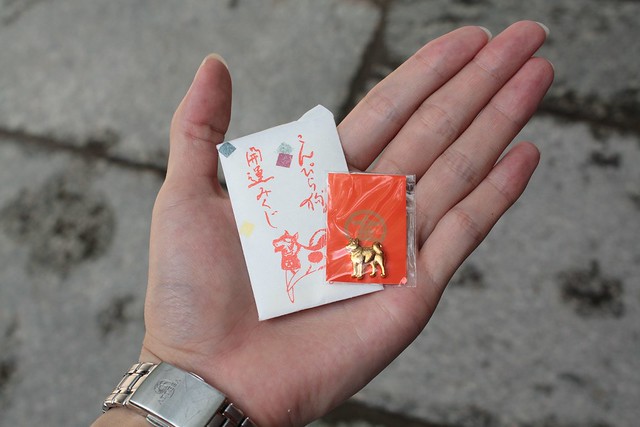