Hasegawa Kakugyo(長谷川角行, 1541-1646) was a practitioner of Shugendo and visited various ascetic sites. Later he started to go through hard training as a Mt. Fuji worshipper in a lava cave called Hitoana(人穴) at the west foot of Mt. Fuji. He is said to be the founder of Fuji-ko(富士講), Mt.Fuji faith. Ko(講) is a group of people professing the same religion.

Hitoana Fuji-ko Iseki(人穴富士講遺跡) in Fujinomiya City is a a holy site of Fuji-ko where about 230 monuments remain. Fuji-ko worshippers build the monuments in honor of Kakugyo and another worshippers, in commemoration of reaching the summit. Now the cave is off-limits to visitors.

It is confirmed that there were already the shrine's gate(trii) in 1480, and the shrine buildings in the mid 16th century. Murakami Kosei put in his own money to restore the shrine buildings at great cost in the 1730s.
The Yoshida Fire Festival(吉田の火祭り, Yoshida no Himatsuri) is held on August 26 by Kitaguchi Hongu Fuji Sengen Shrine and its auxiliary shrine. Mt. Fuji climbing season ends on the day.


In a cave,  Jikigyo Miroku practiced fasting, went into a meditative state, and died in 1733. It's the practice called Nyujo causing one's own deaths in a way that results in mummification. His Nyujo was reported sensationally by kawaraban in Edo(current Tokyo), and his name became widely known to the public. Kawaraban is a single-sheet newspaper printed by means of woodblock printing. They are very much like tabloid papers, and peddlers sold the papers while delivering sales pitch on a street corner.

Believers in Mt. Fuji faith increased rapidly in number.
One of his followers founded a Ko(講) three years after his death.  He built an artificial mound named Fujizuka(miniature of Mt. Fuji) on the present-day Waseda University campus in Tokyo in 1779. The mound was moved to the site about 400 meters away from the campus in 1965.

In the Edo Period, it was not easy for worshippers to climb Mt. Fuji. Fujizuka mounds were designed to allow those who couldn't visit Mt. Fuji to simulate the pilgrimage to Mt. Fuji. Many fujizuka mounds still exist in Japan.

Commoners were prohibited from moving freely across Japan in the Edo Period, but only religious pilgrimage was allowed. However, the cost of the pilgrimage was comparable with a farmer's annual income. Members of Ko(講) put aside some money on a regular basis for the pilgrimage and chose delegates as pilgrims.

In the 1830s, 4.8 million people, which accounted for a sixth part of the total population in Japan, made pilgrimages to Ise Jingu. It was due to the outstanding performance of onshi(御師) belonging to Ise Jingu Shrine. People called onshi(or oshi) belonged to temples or shrines, guided worshippers through the temples or shrines, and arranged accommodations for worshippers like travel agencies. Onshi from Ise travelled all over the country and encouraged people to make a pilgrimage to the shrine.

For more information about Onshi belonging to Ise Jingu at http://ichinen-fourseasonsinjapan.blogspot.jp/2010/06/ise-ondo-koi-no-netaba.html


In the late Edo period, multitudinous Fuji-ko were founded and flourished. Even now, about 70 Fuji-ko groups are active. Each pilgrim in white clothing and a sedge hat climbed the mountain with a big walking stick while chanting the phrase“Rokkon Shojo" (六根清浄, purification of the six roots of perception). The six roots of perception are the eye(sight), the ear(hearing), the tongue(taste), the nose(smell), the body(touch), and the mind.

Most pilgrims climbed up Mt. Fuji from the relatively gentle Yoshida route, offered prayers at the mountain's top, and went down to Gotenba through a long and steep sand hill called sunabashiri(砂走り). This route became popular, as Miroku set down the Yoshida route as the main climbing route.

Oshi houses were open for only two months during the Mt. Fuji climbing season. After the season ended, oshi travelled all over the country and were engaged in missionary work. They visited parishioners for reciting prayers, exorcising evil spirits, and giving talismans every year.

Three Shinto priests of Kitaguchi Hongu Fuji Sengen Shrine are also oshi.  Fuji-ko declined after the profession of onshi was abolished in 1871. Now only two oshi lodging houses have kept the business running in Kamiyoshida, and oshi don't visit parishioners in winter. About 70 Fuji-ko groups are still active. They climb Mt. Fuji in summer, but most of them rest at oshi lodging houses without staying overnight.

The former house of the Togawa Family, 旧外川家住宅) is open to the public, but the house of the Osano Family(小佐野家住宅) is closed.

On the day before Mount Fuji climbing, Fuji-ko pilgrims visited Funatsu and Yoshida lava tree molds, and purified themselves by passing through the caves. Fuji-ko worshippers attached a great importance to the two caves because both of them were near the Yoshidaguchi climbing trail.

Hasegawa Kakugyo discovered a lava cave at the north foot of Mt. Fuji in 1612 when he climbed the mountain. He enshrined Asama no Okami, the deity of Mt. Fuji, in the cave.

Funatsu lava tree molds(船津胎内樹型, Funatsu Tainai Jukei) in Fujikawaguchiko-machi, Yamanashi Prefecture were discovered by a Fuji-ko worshipper in 1673. Yoshida lava tree molds(吉田胎内樹型, Yoshida Tainai Jukei) in Fujiyoshida City, Yamanashi Prefecture were developed as a holy site in 1892. They are interconnected lava molds. A lava flow coated littered fallen trees and burned the insides out leaving interconnected lava molds around the trees. Funatsu tree-mold cave is 68 meters long. Yoshida tree-mold cave is 61 meters long. They have branching smaller caverns. Yoshida Tainai and more than 60 tree molds scattering in this area, are designated as a natural monument in Japan.

Tainai(胎内) means the interior of the womb. The caves are called Tainai from its resemblance to the human rib cage or the womb of a mother. In Fuji faith, one can be transformed by passing through the cave. Now Yoshida tree-mold cave is normally closed, but it's open to the public on April 29 when  Oshi hold Tainai-sai(Tainai Festival). Visitors can enter the cave after a shrine ritual takes place to pray for minimizing damage from volcanic eruptions.

Horses were not able to climb up Fuji from here, so climbers had them go back.


This area is restricted because its torii gate is in danger of collapsing. 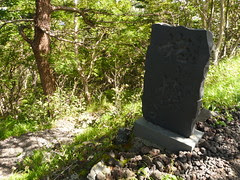 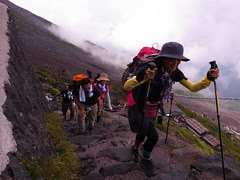 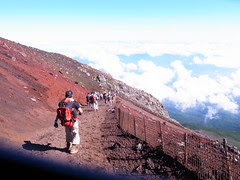 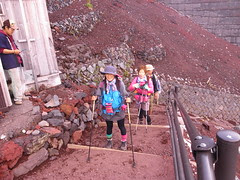 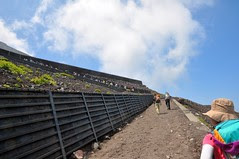 4.3 kilometers to the summit 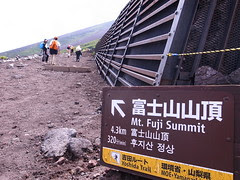 
at the end of the Yoshida route

Fuji-ko pilgrims walked around the edge of Fuji's summit crater. It's called Ohachimeguri(お鉢めぐり). It take about an hour and half to go around the crater. 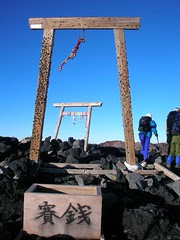