Hiraizumi(平泉) including Motsu-ji Temple(毛越寺) in Iwate Prefecture was registered as a World Heritage site by UNESCO in 2011.
The principle image of Motsu-ji is Amida Nyorai (Amitabha Tathagatae), and the deity of Buddhist prayers called Matara-jin(摩多羅神) is enshrined in Jogyo-do Hall. The Matara-jin image is exhibited to the public once every 33 years. Local people have worshipped Matara-jin as the deity of crops since long ago. 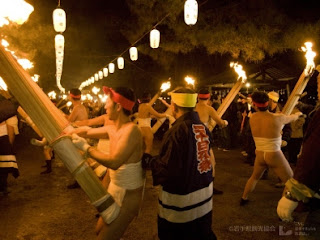 A prayer for good health and agricultural fertility is offered to Matara-jin from January 14th to the 20th. On the last day, a festival called Hatsukayasai(二十日夜祭) is held.

﻿ ﻿
Around 7:30.p.m., people in their unlucky years (yakudoshi) head for the hall to offer vegetables. Men in their unlucky years strike torches together on the grounds of the temple. It's called Hitakinobori.
﻿ ﻿
From around 9.p.m. to midnight, the dance called Ennen no Mai(延年の舞) is performed in the hall. It has been designated a significant intangible folk cultural asset of the country.