In Japan, people have a custom of cleaning house at the end of each year to greet the New Year. I'm struggling to clean my house and make the preparations for New Year's festivities. I'm tired.
﻿
﻿
Ame-yoko(Ameya-yokocho or Ameya Streets) in Ueno, Tokyo is crowded with shoppers buying the ingredients(mainly seafood) for New Year's dishes. 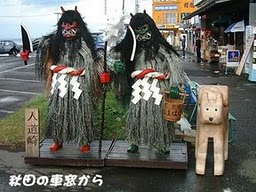 Namahage Festival is held on December 31st in the Oga Peninsula in Akita Prefecture. Men in demons' masks go from house to house with big papier-mache knives and clubs in their hands, saying "Naguko wa inega?(Are there any crying children here?) " They punish lazy fellows, drive away evil and usher in good fortune.


﻿
﻿
Oharae(大祓) is an event to purify people from half-year's worth of sin. It had been held on the last days of the 6th month and the 12th month in the lunar calendar.

﻿ ﻿
At many shrines, people purify them by going through Chinowa(茅の輪) which is a large loop made of Imperata cylindrica(cogongrass) or Miscanthus sinensis (Susuki grass).


In Buddhist beliefs, humans are born with 108 worldly desires which are removed when the bell is struck 108 times. It's called Joya no Kane(除夜の鐘).
The bell is struck 107 times on New Year's Eve and just one time after midnight on January 1st. At some temples, visitors can also ring the bell.


Many people go home to celebrate the New Year with their family, but people who lost their home due to tsunami go to temporary housing or places of refuge to meet their family members.

I was riveted by images of tsunami for days in March, but those images had not been seen on TV in recent months. The end of the year is coming up, those images are often seen on TV. Being looking at those images, I feel butterflies in my stomach. Most tsunami victims still can't see those images.

In tsunami-hit areas, many people are still waiting for their missing family members.
As of December 30, 15,844 people died, 3,451 are missing.
The search for missing persons is still continuing.
If the tsunami had not occurred, most of them would have spent New Year's together with their families, lovers and friends. However, most of the missing persons will see the old year out in the sea.

We have had a tough year.
Helping hands were lent from all over the world after the quake and tsunai occurred. I truly appreciate your help and encouraging words. Thank you very much.
投稿者 ichinen 時刻: 9:27 PM